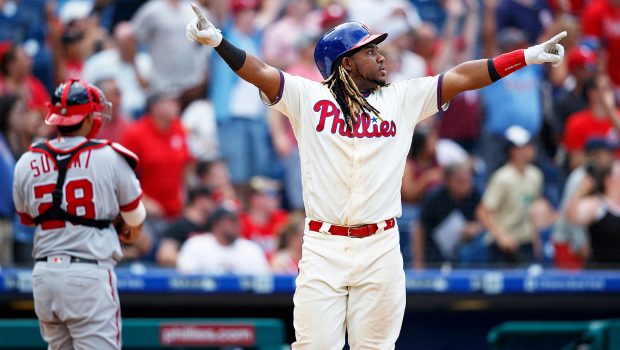 ‘WE NEEDED THIS GAME SO BAD,’ PHILS FRANCO SAID!

Maikel Franco homered with one out in the bottom of the ninth inning to give the Phillies a 4-3 win over the Nationals.

Franco drove the first pitch from Matt Grace (0-2) over the wall in left. It was Franco’s 15th homer of the season and second career walkoff.

“I was looking for a fastball middle-in, and as soon as I hit it I knew the ball was going to go,” Franco said. “That’s a great day, a great moment. It’s something I can’t forget.”

Hector Neris (2-4), who blew the save in a 4-3 loss to the Nationals on Saturday, struck out the side swinging in the top of the ninth.

J.T. Realmuto also went deep for the Phillies, who avoided a three-game sweep.

After connecting, Franco immediately dropped his bat, thrust both forefingers in the air and circled the bases before being mobbed at home plate by his teammates who haven’t done much winning in the last 1 1/2 months. The Phillies improved to 15-23 since leading the NL East by 3 1/2 games on May 29. They entered Sunday trailing the Braves by 8 1/2 in the division and behind both Washington and Milwaukee in the NL wild-card race.

“We needed this game so bad,” Franco said.

A streaky hitter who has been jockeyed in and out of the lineup by manager Gabe Kapler, Franco is 8-for-14 with a pair of homers in his last four games.

“When he’s swinging the bat well and the best version of Mikey, we can’t take him out of the lineup,” Kapler said. “That makes our lineup deep and dangerous.”

Trea Turner, Matt Adams and Howie Kendrick drove in runs for the Nationals, who lost for just the third time in 15 games. Washington is 30-12 since May 24.

“It was a good battle, and we’ll move on and try to win the next one,” Turner said. “We’ll keep going and hopefully win the next 30 out of 40, or whatever the stats are.”

Franco’s homer was the 104th given up by a Washington pitching staff that entered having allowed the fewest long balls in the NL and second-fewest in the majors behind Tampa Bay.

Philadelphia went ahead 2-1 in the fifth on Jean Segura’s two-out single to right and took a two-run lead in the sixth on Realmuto’s opposite-field, leadoff shot to right.

The Nationals tied it 3-3 in the seventh against J.D. Hammer on RBI sigles by pinch-hitter Kendrick and Turner.

But Washington wouldn’t get another hit, finishing the game with six straight strikeouts swinging.