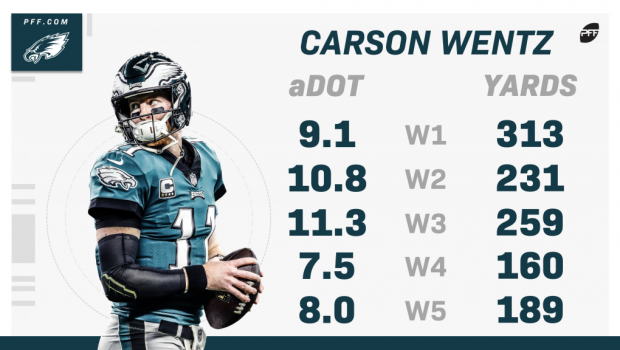 WE LOVE EAGLES WENTZ, JUST NOT IN FANTASY SUNDAY VS. VIKES!

There have been 27 quarterbacks to start each of the last two weeks. Of those, Carson Wentz ranks … 27th in passing yards, at 349.

Four different quarterbacks had more passing yards in Week 5 than he has in those two games combined.

After the Eagles got off to an underwhelming 1-2 start, the team reined Wentz in. His average depth of target in Weeks 1-3 was 10.3 yards, compared to only 7.8 the last two weeks.

A low-upside Wentz against a Vikings defense that hasn’t allowed a 20-point fantasy day to a quarterback since Week 1 is a bad recipe.