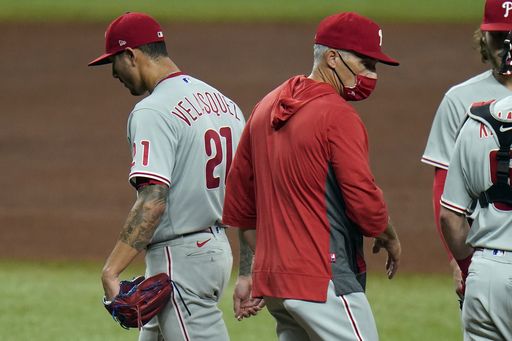 The playoffs start today and for the ninth straight season the Phillies didn’t qualify.

They went 1-7 in their final eight games to finish 28-32 in the pandemic-shortened season.

One more win would’ve given them a wild-card berth.

“I think we could have just as easily won 38 games, 35 games, I really do,” new manager Joe Girardi said, according to the AP.

“I don’t think we were that far from being a 35- to a 38-win total, and we would have felt a lot different with the same guys in the room.”

But the elephant in the room was a bullpen with a 7.06 ERA, worst in the majors. GM Matt Klentak acquired four veteran relievers before the trade deadline – Brandon Workman, David Phelps, David Hale and Heath Hembree combined for a 3.82 ERA with five saves in seven chances in 2020 for other teams. In Philly, they combined for an 8.56 ERA, blew four of nine save opportunities and surrendered 18 homers in 41 innings.

“We had opportunities to win games, and we simply didn’t get it done,” slugger Bryce Harper said. “I feel like that’s been all year long. We’ve had opportunities to win many games, and it just didn’t happen. As we go into the offseason, we’re going to need to understand what we need to do as an organization and as a team to hopefully get better in those situations and get better in any part of this team.”

“My Septembers haven’t been that great, this year’s obviously wasn’t that great,” Nola said. “I felt like I could have done more. I’s just frustrating.”