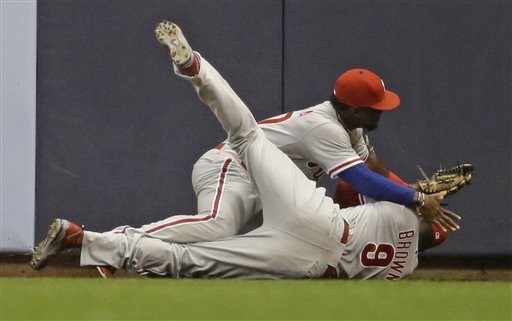 WATCH: A SAC FLY SCORES BREWER FROM 2ND BASE IN PHILLIES LOSS!

Not often do you see a runner tag up from second and score on a fly ball, but Brewers shortstop Jean Segura was able to do so on Friday night in Milwaukee’s 3-1 win over the Phillies.

After driving in a run with a single, and advancing to second on a throw home, in the third inning, Segura scored on Jonathan Lucroy’s deep fly ball to right-center field. Phillies center fielder Odubel Herrera stumbled over right fielder Domonic Brown (above) while making the catch after a miscommunication between the two.