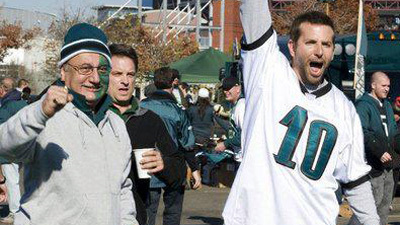 So, this is Friday and we are two days from Sunday night’s mid-season showdown between the Eagles and the New York Giants.

And all week long, the Giants and Eagles have been verbally assaulting one another.

Now, the war of words has spilled off the field, as actor Bradley Cooper — born in Philly, grew up in Jenkintown who starred in “Silver Linings Playbook” — narrated the Eagles’ weekly #FlyEaglesFly video.

The video contains background music from Penn alum John Legend as well as the Roots, the Philly-based band that plays on the Tonight Show with Jimmy Fallon.

“This is more than a midseason matchup,” Cooper begins. “This is a street fight — Wall Street against Broad Street.”

It’s a critical game for both teams, as the winner of the game could find themselves in at least a tie for first place in the NFC East.

“I promise you, there is no brotherly love lost between us and the Big Apple’s big talkers,” he says, narrating over highlights of the Eagles making plays against the Giants.

Cooper then takes a swipe at New Yorkers, putting on a fake accent.

“[These big talkers say] ‘Youse a bunch of cheesesteak-eatin’, Liberty Bell-crackin,’ museum steps runnin’ … yeah yeah yeah. You want to know the best way to shut a loudmouth up? Shut it for them.”