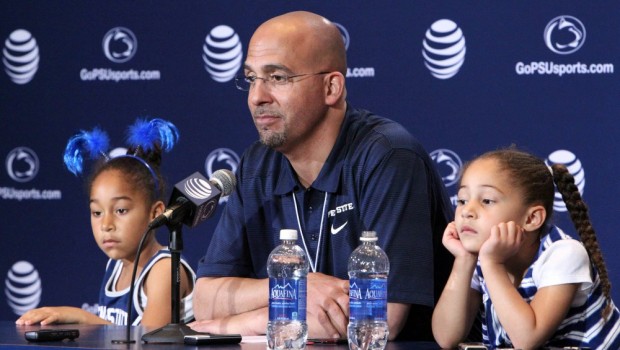 You think Penn State and its millions of alums are happy to finally be bowl-eligible for the first time since 2011?

You have no idea.

Saturday afternoon’s win wasn’t just any old victory for Penn State. Their sixth this season, the win officially makes the team bowl eligible. This will be the first time the Nittany Lions will be able to participate in a postseason game since the 2011 season, when Penn State played and lost to Houston in the Heart of Dallas Bowl.

After that, the NCAA banned the team from postseason play as part of their sanctions connected to the Jerry Sandusky child abuse scandal. The NCAA decided to lift the ban in September, however, which breathed new life into the still-recovering football program.

Saturday’s 30-13 victory over Temple University was one more step in a healthy direction for the team and its fans.,

Franklin was able to compose himself by the time the post-game news conference came around, deftly weaving a Gatorade bottle between his two seemingly very thirsty daughters on either side of him, while congratulating his team, especially those who stuck with the program over the last three seasons.

“We don’t talk about these things a whole lot. Our focus is on being 1-0, which we were this week … but it does mean something a little bit more special,” Franklin said. “The fact that we had 49 seniors that stayed around this program when this university and when this community and this football program needed them the most; the fact that we’re gonna be able to send them out the right way and be able to continue our season and be able to continue to keep our family together for a month or so after the regular season ends is special and I’m really happy for those guys.”