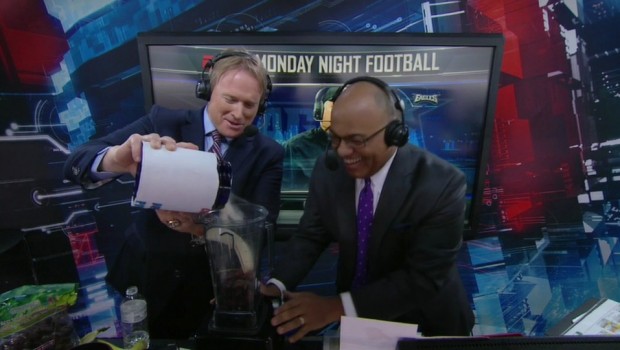 It is no secret that the NFL’s prime-time games this season have almost all been blowouts.

Thursday night on CBS, Sunday night on NBC and Monday Night on ESPN all seem to be so one-sided that many fans tune out.

But ESPN’s Jon Gruden and Mike Tirico concocted a recipe for the boredom of last night’s Eagles’ blowout of Carolina.

There was Gruden, peeling a banana (a Spider Y banana?) with a Chucky smirk, adding something called “Chucky’s Protein Powder”and being mystified about how a blender works while Tirico was throwing in a big glob of pineapple.

What’s next for these two? A cheese steak or a Primo’s hoagie?