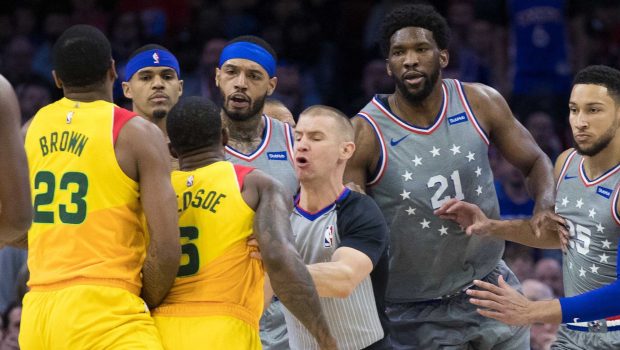 Less than three minutes into last night’s Sixers-Bucks game game, Giannis Antetokounmpo shot an unguarded three from the top of the arc and hit nothing but net.

As the ball was in the air, however, Joel Embiid gave Eric Bledsoe a little shove in an attempt to secure the potential rebound.

When the shot went in, Bledsoe gave a retaliatory shove and got called for a foul.

Embiid lightly passed the ball to the Bucks guard as a slight taunt for what he did, and Bledsoe responded with his best Danny Ainge impression, with the ball hitting the big man’s chest instead of his head.

Bledsoe was ejected, and Joel Embiid was given a tech: