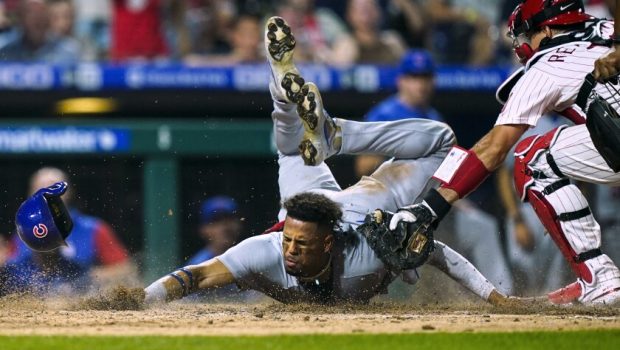 Nico Hoerner homered early and scored the tiebreaking run in a five-run 10th inning that sent the Chicago Cubs to a 6-2 victory over Phillies.

With slugger Bryce Harper out indefinitely because of a broken left thumb, the Phils are looking for Nick Castellanos to help fill the void left by the 2021 NL MVP as the Phillies chase their first postseason appearance since 2011.

Interim manager Rob Thomson said Friday he didn’t consider moving Castellanos out of the No. 3 hole, expecting that his numbers will look similar to career averages once the season ends.

“I haven’t been able to get on base,” Castellanos said. “Obviously, that’s frustrating.”

Hoerner began the 10th as the automatic runner on second base. He stole third with one out and scored on Frank Schwindel’s fielder’s choice. Schwindel hit a high chopper off José Alvarado (3-2), and third baseman Alec Bohm’s throw home was off target.

“Nice job by the guys putting balls in play,” said Cubs manager David Ross, who was ejected in the 10th.

Bohm drove in a run with a groundout in the bottom half.

Wheeler threw seven strong innings for the Phillies, who are in the thick of the NL wild-card race but have dropped the first two games of the series to the lowly Cubs.

Chicago began play with the fourth-fewest wins in the majors but won its third in a row. The Cubs improved to 4-11 in their MLB-leading 15th extra-inning game.

David Robertson (3-0) tossed a perfect ninth for the win.

Wheeler and Marcus Stroman were both stellar in a starting pitchers’ duel. Wheeler allowed only Hoerner’s homer and two other hits with six strikeouts and no walks.

“Settled in after that,” Wheeler said of the homer.

After finishing as the NL Cy Young Award runner-up in 2021, the Philadelphia right-hander wasn’t selected for this year’s All-Star Game despite a strong first half. He continued to impress against the Cubs while lowering his season ERA to 2.78 with 114 strikeouts and 22 walks in 106 2/3 innings.

Stroman matched Wheeler, pitching into the seventh and giving up one run on five hits with five strikeouts and two walks.

“He just found his sinker,” Ross said. “When you get starts like that, you feel like you’re in every ballgame. I thought he was very much in control.”

Darick Hall led off the seventh with a double against Stroman and scored on J.T. Realmuto’s single, ending the night for the Cubs’ starter after 86 pitches on a scorching evening that began with a game-time temperature of 97 degrees. Stroman lowered his road ERA to 2.30; he has a 7.94 mark at home.

Chicago took a 1-0 lead in the second when Hoerner drove an 89 mph slider into the seats in left. Morel’s sixth-inning double and Ian Happ’s seventh-inning single were the only other hits off Wheeler.

The Cubs threatened in the eighth when they loaded the bases with two outs. Thomson lifted lefty Brad Hand for right-hander Connor Brogdon to face the right-handed-hitting Contreras, and Brogdon got Contreras to pop out.

Philadelphia had a good chance to go ahead in the bottom half when pinch-hitter Matt Vierling led off with a double, but Steven Brault struck out NL home run leader Kyle Schwarber before Mychal Givens got Rhys Hoskins to ground out and Castellanos to strike out swinging.