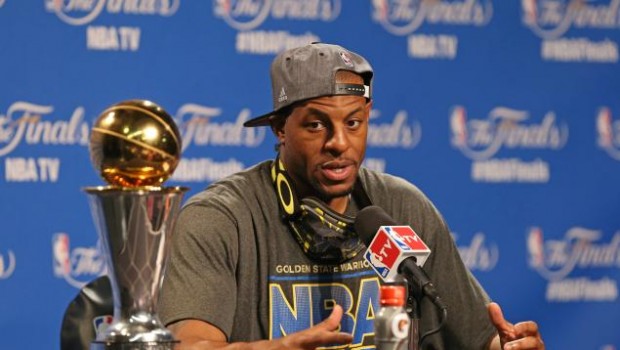 F. Scott Fitzgerald is famous for a lot of things he wrote:

“There are no seconds acts in American lives.”

Scott Fitzgerald, meet Andre Iguodala, who failed as a leading man on the Sixers but came up roses as a role player on the Warriors.

Iguodala, true to his nature, never once bristled at the line of questioning. Never once did he give any indication of frustration. Instead, he patiently recited the company line: The team comes before any one individual. He was willing to do whatever the team needed to win.

In the NBA Finals, Iguodala’s patience and maturity paid huge dividends for the Warriors. Tasked with defending the best player in the world, Iguodala turned in the performance of a lifetime. Iguodala slowed down LeBron James just enough for the Warriors to win their first title in 40 years. And Iguodala found enough life in his legs to provide a real spark on offense, too.

“It definitely paid off,” said Iguodala, discussing his personal sacrifice … while wearing ski goggles in a Champagne-soaked locker room. “It’s an honor to win the MVP. But for me, it’s not about that. It’s about getting guys to buy in.”

That’s Iguodala for you. It’s not about him.

Has there ever been a more unlikely MVP? Perhaps not. The 25 points were not only a season high, they were the most he’d scored since Nov. 4, 2013. He is the first Finals MVP who did not start a single game during the regular season.

These things normally go to the star of the winning team. Stephen Curry certainly had an argument for the honor, but it was fitting that Iguodala won the award. The Warriors preached teamwork and selflessness all season. On any given night, another member of the deep bench could, and would, contribute.

So, Iguodala’s MVP triumph could be read as an acknowledgment of the Warriors’ overall philosophy. Next man up. Do what’s needed.

“I think they got it right,” said assistant coach Luke Walton, the man who helped hatch the plan to start Iguodala in place of center Andrew Bogut in Game 4. “Steph Curry? You could always give it to him. But this was perfect. They got it right.”

Walton’s boss, the man who ultimately pulled the trigger on inserting Iguodala into the lineup, summed up his feelings on the matter in an emotional interview after the game.

“It’s really fitting that the award went to Andre because he sacrificed his starting role from the first game of the season,” Kerr said. “That set the tone for our whole season. An All-Star, an Olympian saying, ‘OK, I’ll come off the bench.’

“It set the tone for everything we were able to accomplish. Couldn’t happen to a better person.”

Curry, the only other horse in this race, couldn’t agree more.

“He was special. He deserved the Finals MVP for impacting the game on both ends,” the NBA’s regular-season MVP said. “He just needed the opportunity. … Can’t say enough about that guy.”

Even though Iguodala didn’t start all season, he was almost always the first man off the bench. And he was invariably on the court when things mattered most.

“We all look to Andre when things go bad,” forward Draymond Green said. “That’s who we look to. He was great the entire series. He saved this season for us. He’s a professional guy. It showed. That’s why he’s the MVP. And that’s why we’re champions.”

Things changed dramatically for Iguodala — and the Warriors — in the Finals when he started Game 4. It was a surprise move suggested to head coach Steve Kerr in a 3 a.m. text from his assistants. Kerr, true to his teamwork ideal, listened to his co-workers and tried it.

Iguodala responded with two of his best games, 22 and 14 points. Slashing to the hole. Pushing the pace to help the Warriors run. Using his long arms to keep James uncomfortable. Iguodala was everywhere when it mattered most.

Considering his age (31) and the mileage he brought into these playoffs on creaky knees, it was downright astonishing that he was able to push his body to perform. As one Cavs fan texted me during the Finals: “Tell Iguodala it’s not 2008!”

Well, for a few nights, it was 2008, a time when “Iggy” was the focal point of the Philadelphia 76ers. He didn’t seem comfortable in that role, though. He’s much better suited to playing a facilitating style. Moving the ball. Helping his teammates.

It’s a unique brand of basketball Iguodala plays. And it’s refreshing to see the NBA award someone for something other than scoring. Teamwork. Defense. Selfless play. Every coach in the league preaches these ideals.