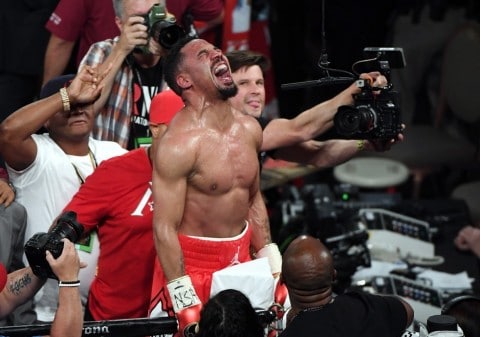 The one thing that boxing fans were looking for after a closely contested first bout between Andre Ward and Sergey Kovalev was clarity.

After Ward took a 114-113 unanimous decision in their first meeting, fans were hopeful that a rematch would prove once and for all which of these two fighters is best.

But they didn’t get it. Fans will continue the debate after a controversial ending in which referee Tony Weeks called an end to the contest with 31 seconds remaining in Round 8. It seemed to be an extremely premature stoppage, despite the fact that Kovalev was clearly doubled over in pain.

“I could tell he was reacting to my body shots, and I knew I had him then,” Ward said. “I knew he was hurt.”

But one man’s body shots are another man’s low blows.

“Low blow,” Kovalev said, watching a replay of the final seconds. “Again. Another one.”

Two judges had Ward ahead 67-66 at the time of the stoppage. A third had Kovalev up 68-65. So it appeared to be headed for another close decision had it gone to the cards.

Ward had a query for boxing writers and fans in the ring after the bout.

Good question. But for now, the Bay Area native will retain his World Boxing Association, International Boxing Federation and World Boxing Organization light heavyweight titles over his Russian opponent, who will surely have some complaints later.