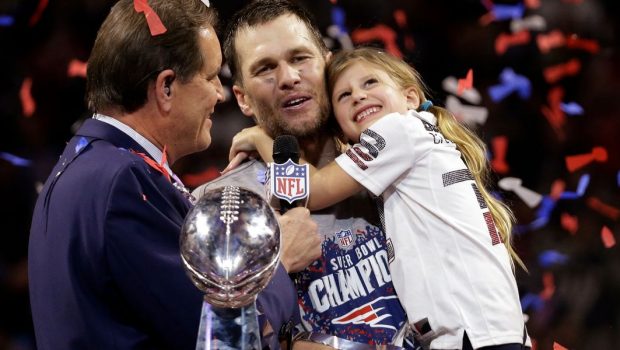 You can make a case that back home in New England the Patriots have transcended cult and become a regional religion.

Consider the church marquee sign in front of St. Mary’s in Foxborough Sunday morning, which read, “And you shall slaughter the Rams Exodus 29:11 Go Pats’’

Oh, and let’s not forget the book of Daniel, where it is written, “No one could rescue the ram from the goat’s power.’’

That’s GOAT. Greatest Of All Time, a.k.a. Tom Brady.

Brady was not at his MVP best in this one. He completed 21 of 35 passes for 262 yards. He did not throw a touchdown pass and had one interception. His quarterback rating was 71.4. But he led the Patriots to a game-winning drive in the fourth quarter — as he has done in each of the Patriots’ six Super Bowl wins.

“It was like a home game here,’’ said Brady, holding his daughter in his arms on the victory platform. “It was an unbelievable year. We fought through everything.’’

“We love you guys,’’ Edelman told the crowd while endless confetti fell onto his bearded head.

In his pregame interview with Jim Gray, Brady said, “We came up short last year and I think that stuck with me all year and I know how badly I want this one . . . I asked God this week, ‘One more, and I’ll never ask for one more.’ ’’

Brady’s winning drive was masterful. Taking over a 3-3 game with 9:49 left, he moved the Patriots 69 yards in five plays. He completed four straight passes, feathering the last one over the coverage and into the arms of a diving Rob Gronkowski at the 2-yard line. It might have been the last catch of mighty Gronk’s career (he would not answer the retirement question after the game).

Sony Michel ran it across the goal line on the next play.

“I knew it was going to come to me and I had to make that play,’’ said Gronk. “ . . . This is unbelievable. This is amazing. This is surreal. Everything we’ve been through this season . . . just unreal.’’

The parade is Tuesday. Moments after victory was secure, Boston’s mayor, Marty Walsh, tweeted, “Fire up the duck boats. @CityOfBoston! We will see you at the #SBLIII parade Tuesday at 11:00 am!’’

These are certainly the good old days of Boston sports. On a Sunday night last October, the Red Sox won the 2018 World Series, beating the Dodgers in Game 5 as thousands of New Englanders took over Chavez Ravine.

Exactly 14 weeks later, the Patriots were crowned champs on another Sunday night while their raucous, righteous fans took over somebody else’s stadium.

Maybe they can all go to the White House together.