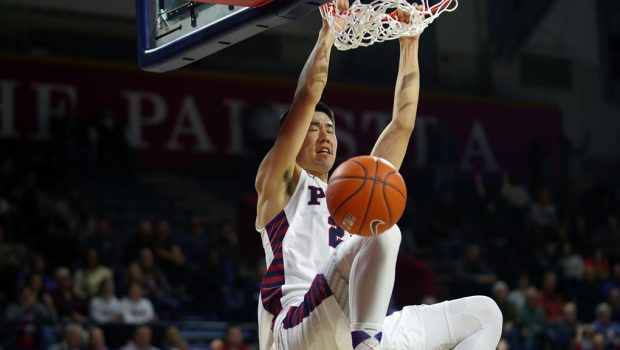 Penn’s A.J. Brodeur and Michael Wang dominated inside 20 and 19 points respectively in a 75-65 win at New Mexico.

Anthony Mathis, Corey Manigault and Carlton Bragg each scored 13 to lead the Lobos (5-6). But Mathis missed all of five of his second-half shots.

“I thought they were worried about our shooting,” Penn coach Steve Donahue said. “So I thought we did a good job of reacting to that, taking advantage of A.J. and Michael in the box.”

It took the Quakers (10-2) just over seven minutes to build a 15-point lead at 19-4 after Jackson Donahue’s 4-point play and it took New Mexico the same amount of time to erase it, tying the game at 24-all on Vladimir Pinchuk’s fastbreak layup with 5:41 left in the first half. New Mexico took its last lead at 53-52 following a Drue Drinnon 3-pointer that capped a 9-0 Lobos run with 11:05 remaining.

“It’s just an amazing place to play — and loud,” Donahue said. “Fans are rabid and with their style of play, they could have collapsed. Every time I thought we were on the verge, we made a play that kept them at bay. It’s not an easy style to play against and it’s a very difficult place to play.”

The teams were tied twice over the ensuing five minutes before the Quakers pulled away behind an 11-2 run that Bryce Washington started with five-straight points.

“I thought we made a nice run there in the middle of the second half,” New Mexico coach Paul Weir said. “And I thought they responded very well to it, made some plays, made some shots.”

New Mexico missed its first six shots from the foul line and the Lobos struggled the rest of the game, finishing 10-for-23. The Lobos got away from their normal high-pressure man defense, spending large chunks of the game in an extended zone.

“For two days, I thought it was pretty good,” Weir said. “Based on different things we were looking at, it was just something that we felt we needed to go to. It was great in the first half. It was double the success rate of our man.”

Quakers starting center Max Rothschild did not play because of a back issue, but that allowed Wang to have an impact as a starter rather than coming off the bench.

“Michael is kind of one of our best scorers anyway, even though he’s coming off the bench,” Donahue said. “But it was a probably a good thing in a game like this because Michael has the ability to score against that kind of defense.”