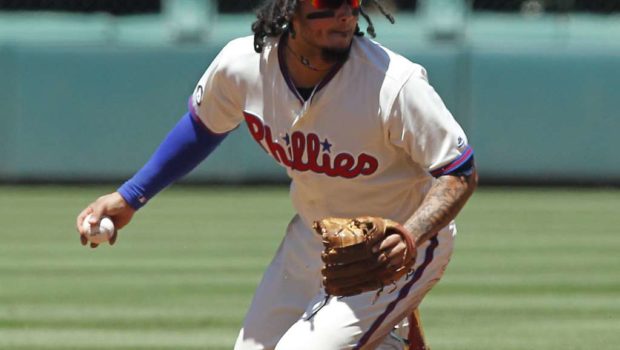 Freddy Galvis hit a bases-loaded siingle in the ninth inning to give the Phillies a 2-1 victory over the Atlanta Braves.

The shortstop also made three excellent plays in the field, including a run-saving gem in the first inning.

“I try to catch the ball and do the job for my pitchers and for the team,” Galvis said.

Andrew Knapp led off the ninth with a double to left off Rex Brothers (1-2), who was replaced by Akeel Morris.

Morris walked pinch-hitter Ty Kelly. Cesar Hernandez was trying to advance the runners with a sacrifice, but his bunt stayed just inside the third-base line andFreddie Freeman’s throw was not in time, loading the bases with no outs.

Galvis pulled Morris’ second pitch into right to score Knapp and lift the Phillies to their fourth straight victory and eighth in the last 11.

“We’re taking a step forward,” Galvis said. “We were losing games and there was some frustration. We’re playing hard and with a lot of energy.”

Kelly’s RBI single in the 11th on Saturday night gave the Phils a 4-3 win.

Odubel Herrera and Hernandez each had a pair of hits for the Phillies.

“That’s the best I’ve seen him look as far as mound presence is concerned,” Phillies manager Pete Mackanin said. “That’s a really big step for him.”

R.A. Dickey also tied his season best by going seven innings for the eighth time, giving up one unearned run on six hits with eight strikeouts and three walks.

The Phillies took a 1-0 lead in the fourth when Herrera singled, went to second on a wild pitch, moved to third on a groundout and scored on a passed ball.

Dickey’s knuckleball was moving all over the place, resulting in a career high-tying four wild pitches and two passed balls. But as challenging as it was for Braves catcher Kurt Suzuki, Dickey’s specialty pitch also gave the Phillies fits.

“I just had a good feel for it,” Dickey said. “I had a swing-and-miss knuckleball today.”

The Braves tied it in the eighth off Luis Garcia, snapping his career-best scoreless innings streak at 21 2/3.

The Phillies nearly took the lead in the sixth, but Dickey tagged out Herrera, who was trying to come home from third after another ball got away from Suzuki.