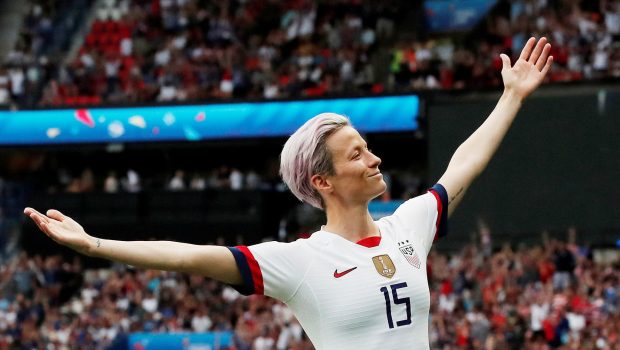 Nobody seemed better prepared for the moment than forward Megan Rapinoe, who scored twice as the United States defeated France, 2-1, before a capacity crowd of 45,595 at the Parc des Princes stadium.

Rapinoe scored on a free kick in the fifth minute, swooped onto a crossing pass for a second goal in the 65th and seemed invigorated — or at least not distracted in the slightest — after her midweek jousting with President Trump, who had criticized her for saying she would not visit the White House if the United States won its fourth World Cup.

“I don’t really get energized by haters or all that,” Rapinoe said. “I feel like there’s so many people that love me, so I’m like: ‘Yay, keep loving me. This is great!’ I’m more energized by that.”

If the Americans — the only non-European team among the eight quarterfinalists — are to be thwarted in their defense of the 2015 title, and dislodged as the No. 1 team in the world, that must wait until at least Tuesday, when they will play a semifinal against England in Lyon. But England will have to contend with Rapinoe, who has scored five goals in five World Cup matches and has surged through this tournament with a freewheeling personality off the field and a merciless intent on it.

“It’s the knockout rounds,” Rapinoe said. “You don’t get past it without statement performances.”

From the kickoff, Rapinoe, who will be 34 next week, sent the American attack searing down the left wing as if on a sprint relay. In the fifth minute, she hurled the ball upfield on a quick throw-in and France’s stalwart central defender, Griedge Mbock Bathy, had to yank down the forward Alex Morgan as she raced in on goal.

Mbock Bathy was given a yellow card but the true punishment came a moment later, when Rapinoe sent a low, wicked free kick from about 22 yards that appeared to dip through the legs of both the American midfielder Julie Ertz and the French captain Amandine Henry before sailing past goalkeeper Sarah Bouhaddi, who did not have time to lift a hand to stop it. Rapinoe ran to the corner and theatrically spread her arms in celebration.

Staked to a lead, the United States defense remained compact and organized and cut out repeated French attacks for the first 80 minutes. The Americans were faster and more insistent to the ball, leaving their French players often disjointed in their passing and unnerved at times by the ferocious play of their opponents.

The United States left back, Crystal Dunn, masterfully contained the speedy French forward Kadidiatou Diani. Ertz, Becky Sauerbrunn, Kelley O’Hara, Samantha Mewis and the goalkeeper Alyssa Naeher were indefatigable in their hustle and sturdy in their positioning and anticipation.

Asked beforehand if the quarrel with the president would distract the American team, Coach Jill Ellis had answered emphatically that it would not, saying that her team “lives in pressure,” as if it were a garment.