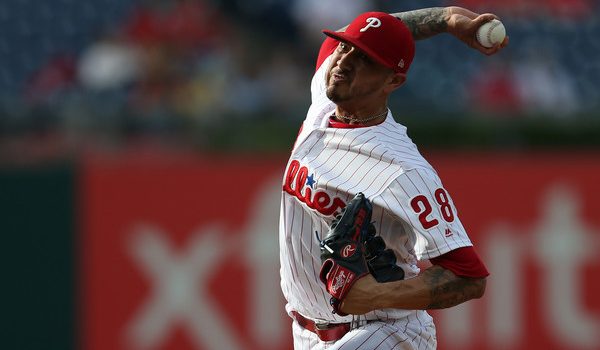 VINNY IS GREAT AGAIN AS PHILS SQUISH FISH AND STAY IN 1ST PLACE!

Vinny Velasquez allowed two hits in 6 1/3 scoreless innings to lead the Phillies to a 5-1 victory over the visiting Miami Marlins.

Until recently Velasquez (8-8) had been plagued an inconsistent hurler, but he struck out seven and walked one to continue his strong form.

He has a 0.71 ERA in his last five appearances. Velasquez didn’t allow a hit until Miguel Rojas’ two-out single in the fifth.

The right-hander, who was acquired from Houston prior to 2016 for reliever Ken Giles, is finding his comfort zone.

“Everything is falling into place and I’m still learning as I go,” he said. “Still a lot of room to work.”

Seranthony Dominguez recorded the final four outs for his 12th save in 13 chances as the Phillies won their third straight to remain a half-game in front of Atlanta for first place in the NL East.

“It’s fun for all of us,” Velasquez said.

Brian Anderson had two hits with a double and an RBI for the Marlins, who have lost four in a row.

Dominguez pitched out of a jam in the eighth, striking out J.T. Realmuto on three pitches with runners on first and third. Miami had pulled within 2-1 on Anderson’s two-out RBI single off Pat Neshek, who gave up a run for the first time since last September to snap his scoreless streak at 14 innings.

The Phillies, helped by an error on shortstop JT Riddle, gave Dominguez some breathing room with three unearned runs in the eighth on Jorge Alfaro’s RBI single and Roman Quinn’s two-run double.

Miami threatened against Velasquez in the seventh. Anderson led off with a double and went to third on Realmuto’s groundout. Kapler lifted Velasquez despite just 85 pitches for Aaron Loup to face slugger Justin Bour in a lefty on lefty matchup. Loup, acquired from Toronto on Tuesday for just these situations, plunked Bour with his second pitch to put runners on first and third. But the Phillies got out of the jam when right-hander Victor Arano came on and struck out Martin Prado and got Derek Dietrich to pop out in foul territory to first baseman Carlos Santana.

Velasquez helped himself in the third when the Phillies took a 1-0 lead. He led off with a double to right off Trevor Richards (3-6) for his second extra-base hit in his 97th career at-bat and scored on Rhys Hoskins’ single just in front of diving center fielder Magneuris Sierra.

The Phils added a run in the seventh. Cesar Hernandez walked with two outs, went to third on Hoskins’ double and reached on a wild pitch by Adam Conley.

Richards allowed one run on four hits in five innings with seven strikeouts and two walks.