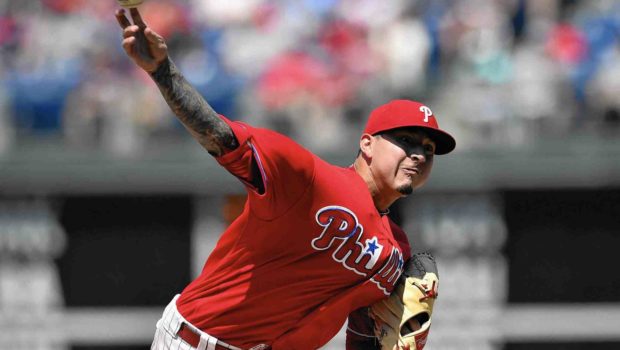 VINNY WAS GREAT AND PHILLIES ARE ON A 5-GAME ROLL!

It is the Phillies’ fifth victory in a row, matching their longest winning streak since a six-game run from April 26 to May 1 of last season. They improved to 10-9 and are above .500 for the first time since winning on Opening Day.

Velasquez overpowered hitters in his first two starts, but he also threw a ton of pitches, partially due to his high strikeout numbers. He rung up 17 batters in nine innings in those two starts.

Velasquez then pitched six innings last week against the Mets, striking out just five hitters combined in those two starts. It helped that he threw 19 first-pitch strikes to the 26 batters he faced.

“Even though he’s not striking people out like we know he can and will, he’s using all of his pitches and he got us into that seventh inning, which was huge,” Phillies manager Pete Mackanin said of Velasquez, whose last six decisions have all been losses.

Velasquez also hit a leadoff single against Marlins left-hander Wei-Yin Chen in the third, which culminated in a Maikel Franco grand slam.

“Just that little inning there,” Marlins manager Don Mattingly said of the Phillies’ four-run third. “I thought [Chen] was throwing the ball well early. I think he missed a spot there. He was trying to get the ball up and in on their third baseman there.”

The Phillies silenced Christian Yelich, Giancarlo Stanton and Marcell Ozuna. They entered the game hitting .293 with 49 RBIs, but went 0-for-11 with a walk and a sacrifice fly.

“That was huge,” Velasquez said. “Those guys are pretty much the heart of the lineup. Managed to put them down, even though I had that walk. If I got those guys out, it’s going to be a good ballgame, and today was a good one.”