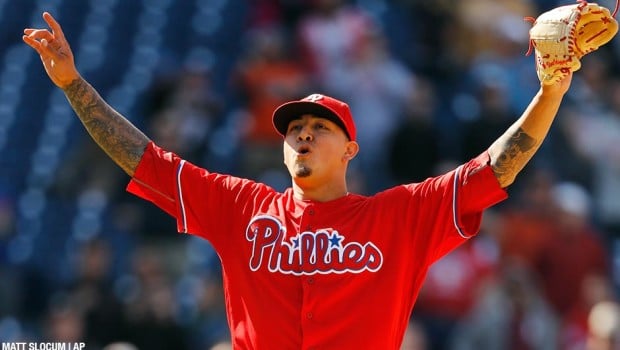 Vince Velasquez is back but what are the terms of his return?

Velasquez rejoined the Phillies yesterday in San Francisco, and he is expected to start next week in Arizona.

Velasquez offered some insight before last night’s series opener against the Giants, saying he and his agent, Scott Boras, have discussed a possible innings limit.

Velasquez has been on the disabled list since June 9 because of a strained right biceps, but he made a successful rehab start Wednesday with Double-A Reading.

The Phillies planned to be careful with Velasquez even before the injury. First, he has not pitched more than 124 2/3 innings in a season, so they never had any intentions of turning him loose. Second, the team had health concerns when they acquired him from Houston in a December trade.

“The agents and I discussed it a little bit, but I don’t know the definite answer, an exact amount of innings,” Velasquez said. “I don’t know, I’d want to say roughly like maybe 150 or something, maybe 160 tops. If there was a possible chance of being in a playoff run or something, I would love to help the guys out in relief because I’ve done that in the past.”

Boras has a history of watching closely over his young pitchers, most notably Matt Harvey, Stephen Strasburg and Jose Fernandez.

“He was really on my butt about this injury thing,” Velasquez said. “I mean, any injury you’ve got to take it very seriously. He was really strict on it. … We’re all on the same page. I filled in everybody about what was going on. They’re aware of my bullpens and how many throws I was doing.”

“I know it’s obviously on our radar as well,” Phillies president Andy MacPhail said. “I would say, philosophically, we’re probably in the same ballpark.”

“All I know is I’m just going to keep pitching until they tell me to stop,” Velasquez said.

Phillies manager Pete Mackanin said he could announce today when Velasquez will pitch next week. Mackanin said left-hander Adam Morgan “possibly” could be moved to the bullpen. Morgan is scheduled to start Monday in Arizona.