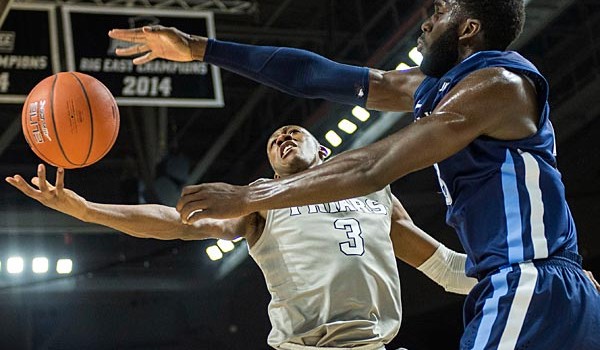 Cat Daniel Ochefu was a bear inside — 19 points, 9 rebounds and 1 blocked shot off the bench.

Chalk it up to the sight of his team losing a conference game at home.

Or chalk it up to candor.

Either way, Providence coach Ed Cooley was sufficiently impressed by Villanova, which had just beaten his very good Friar team 74-68.

And he wasn’t afraid to say how impressed he was.

“I think Villanova can win the national championship,” Cooley said. “They have a lot of experience, they withstand runs. But we didn’t play with enough pop. We played on our heels for 34 minutes and that was disappointing to see.”

A sellout crowd of 12,410 witnessed first-hand just why Villanova is the best defensive team in the Big East as the Wildcats handcuffed the home team most of the way and grabbed a win that keeps the sixth-ranked team in the country in first place in the conference. The Wildcats are now 22-2 and 9-2 in the Big East.

The Friars have lost three of their last four games to fall to 17-8 overall and 7-5 in the Big East. That sets up a must bounce-back game Saturday against Seton Hall.

The Friars shot 43 percent for the game, but a dreadfully slow start in the second half helped Villanova pull out to leads of as many as 14 points. The Friars cut the deficit to six with just under seven minutes left, but ’Nova went on a roll where it scored 10 of 12 points from the foul line to go up 60-49.

The Friars had another push, this time with LaDontae Henton making two of three from the foul line and Jalen Lindsey banging in a corner 3-pointer that cut the lead to 60-54 with 2:04 to play.

But the PC defense could not slow Villanova down without fouling down the stretch. The Wildcats closed the game with only two field goals in the final 8:15 but did their damage from the foul line, finishing 22-of-30 over that span and 27-of-37 for the game.

“It’s a great win for us tonight in one of the toughest places to play in the country,” said Villanova coach Jay Wright. “It’s a good win for us, a big game for us.”

Henton led the Friars with 23 points, but the majority came after Villanova grabbed control with its 14-point lead. Kris Dunn and Tyler Harris added 17 points each.

Cooley said his team’s recent slump is attributed more to a deadly schedule than poor play.

“We’ve been right there except for St. John’s,” said Cooley. “We’re getting better. That team right there (Villanova) is going to win 29, 30 games.”

The first half was an expected offensive grind for the Friars. PC looked to push the pace early on and get some easier looks, but the half ended with the Friars shooting 41 percent, turning the ball over eight times and trailing 29-26.

Villanova did its best to slow Henton on the wing and he managed only one bucket on three shots. Most of PC’s offense revolved around Dunn working off high-ball screens. That produced three baskets (two 3-pointers) and eight points, but maybe more important was that Dunn managed just two assists.

Villanova’s balanced attack was humming at a nice clip as three players had between eight and 10 points and the Wildcats made 52 percent (12-of-23) of their shots. Seven-footer Daniel Ochefu came off the bench to make all five of his shots — all dunks — as the PC defense somehow kept leaving the big man alone near the rim.

The start of the second half was a disaster for the Friars. Villanova came out with even more ball pressure and the Friars had no answers. Villanova scored the first five points to go up 34-26 as the Friars began the half shooting 0-of-3 with four messy turnovers. A lift from Harris (two free throws, a corner 3-pointer) brought it back to three points, and a Dunn-to-Harris feed for a layup kept the deficit at 37-34 after the opening eight minutes of the second half.

But as if on cue, the Villanova defense again stiffened and this time the results were impressive. The Wildcats began to hit open 3-pointers with Dylan Ennis and then Josh Hart (twice) knocking in treys. Hart’s two bombs versus the PC zone defense sparked an 11-0 run that opened a 48-34 lead.

PC’s opening 12 minutes of the second half were simply deadly. The Friars made just two of their first 13 shots, both by Harris. Dunn and Henton were a combined 0-of-9.