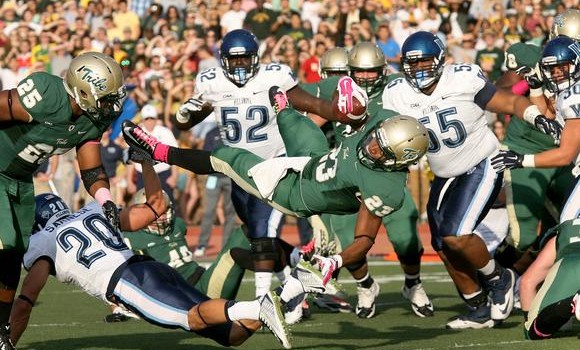 ROBERTSON LIFTS VILLANOVA PAST W&M, TO TOP SPOT IN CAA

Villanova’s quarterback John Robertson has been the Wildcats’ savior, especially in the clutch, and yesterday he elevated the fifth-ranked Wildcats to a 35-31 victory Saturday at William and Mary.

Robertson had the last word in a back-and-forth affair in which No. 15 William and Mary matched the potent Wildcats, yard for yard and nearly score for score. He drove his team 69 yards in 59 seconds, with no timeouts, his 13-yard scoring toss to Kevin Gulyas the game-winner with 52 seconds remaining.

Robertson finished with 330 yards passing and rushing, and accounted for four touchdowns, as Villanova (6-1, 4-0) is alone atop the Colonial Athletic Association.

“Robertson’s a helluva player, he’s a helluva player,” Tribe head coach Jimmye Laycock said. “He’s got a great knack of knowing where the pressure is and how to step up. He’s also a very, very good runner. And we know that. We’ve played against him. He’s tough to tackle. He’s just a very good player. He makes them go.”

William and Mary still had life after the Wildcats’ go-ahead score. Aided by two Villanova penalties, the Tribe advanced to the Wildcats’ 32-yard line, with the clock at :00 and one untimed play remaining. But quarterback Steve Cluley’s heave into the end zone fell incomplete.

The Tribe (4-3, 1-2 CAA) lost its second consecutive game to a top-five opponent, though W&M demonstrated far more fight and production than the previous week’s 32-3 wax job at New Hampshire.

W&M took second-half leads of 24-21 and 31-28, only to see Villanova respond. Leading 31-28, the Tribe moved inside the Wildcats’ 35. Facing fourth down with the clock under two minutes left and the Wildcats with no timeouts, Laycock elected to punt and force them to drive farther.

Instead, Hunter Windmuller’s punt covered just 2 yards, and Villanova took the ball at its 31 with 1:51 remaining. Robertson completed three passes on the drive, the biggest a 34-yard throw to Clay Horne on third-and-10 to the W&M 13. Two plays later, he hit Gulyas on a short crossing route, and he turned upfield, avoided a tackler and dove into the end zone.