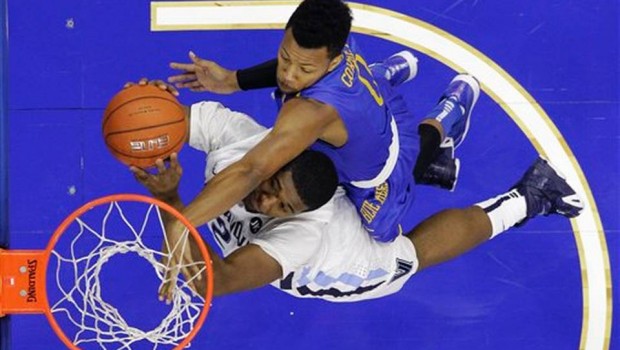 A day of rest.

Coach Jay Wright would object to the characterization but that’s what coaches do.

Kris Jenkins (above photo) scored 13 points to lead five players in double figures and No. 12 Villanova cruised to a 78-47 win over Delaware at the Wells Fargo Center.

Darrun Hilliard and Daniel Ochefu each scored 12 points, and both Dylan Ennis and Phil Booth had 10 points and four assists for the Wildcats (6-0), who held the Blue Hens (0-5) to 31 percent shooting and forced them into 17 turnovers.

Cazmon Hayes led Delaware with 17 points on 6-of-21 shooting and Devonne Pinkard added 11.

After Villanova took a 34-16 lead into halftime, Hilliard drilled two quick 3-pointers to start the second half to help the Wildcats surge to a 44-16 advantage.

Hayes stopped a 23-1 Villanova run with a steal and dunk with 16:30 remaining — the Blue Hens’ first bucket in eight minutes. But Delaware never got closer than 22 points as the Wildcats made nine 3-pointers in the second half to keep a hefty lead throughout.

The Wildcats closed the first half on a 17-4 run after Josh Hart had an athletic offensive rebound and putback right before the buzzer.

Delaware, which has yet to play a home game this season, is feeling the effects of graduating top scorers Devon Saddler and Davon Usher from last year’s NCAA tournament team and then losing Jarvis Threatt when the star guard was dismissed from the team over the summer. Everyone in the Blue Hens’ starting lineup is either a freshman or a sophomore.

Villanova has won all 13 meetings with Delaware, including in each of the past six seasons.