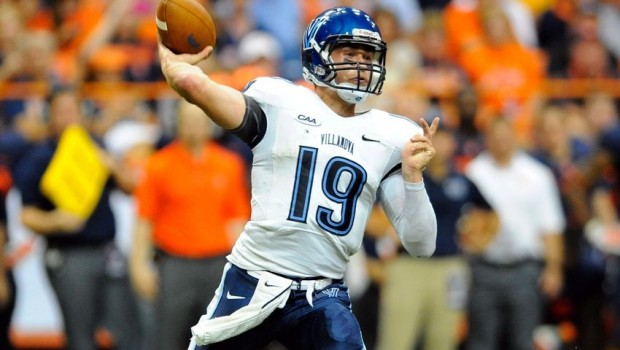 Villanova quarterback John Robertson (photo above) must be wondering what it takes to impress his coach, Andy Talley.

The Wildcats’ signal-caller completed 13 of 16 passes for 189 yards and four touchdowns in the Cats’ 44-21 home victory over Rhode Island. He added 61 yards on eight carries.

“I really didn’t think he had a great game today. He was not crisp in the first half. He was just not really as good as he’s been all year even though the stats speak well.”

Robertson threw for four touchdowns for the fourth consecutive game. It’s been a remarkable run for a player who a year ago rushed for 1,405 yards.

“I think it’s just our offensive line’s protection, receivers getting better. Teams don’t just stack the box on us anymore they have to respect the pass,” said Robertson, who brought his season totals to 20 touchdown passes against one interception and 1,456 yards through the air with the win. “Last year, we fell into where they would stack the box and the only way we could run was if we had another blocker block for me so I’d have extra room running. Everyone is really stepping up this year.”

“He’s really quite an inspirational leader for us. He’s always a great responder in difficult segments during the game,” Talley said of receiver Poppy Livers. “He’s really raised the level of his play. He’s become that go-to receiver, which surprised me because he was just part of the package. He’s made some really big plays for us at this point in the season.”

Livers started his Wildcats career as a walk-on. He’s since risen to captain.

“He’s awesome off the field and on the field,” said Robertson. “One of the great things about him is you throw the ball to him and it’s five yards down the field, he’ll turn up and he’s trying to go as far as he can and take it all the way every time.”