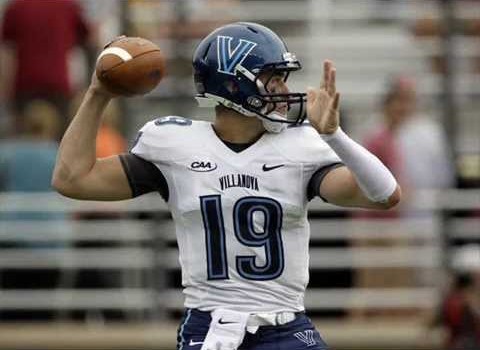 NOVA’S ROBERTSON GETS WALTER PAYTON AWARD AS BEST IN FCS

If anyone doubted how important quarterback John Robertson was to the 2014 Villanova football team, it should be noted that a concussion kept him from from playing last Saturday and the Cats lost 34-31 in the FCS quarterfinals to Sam Houston State.

Last night his excellence was validated when he won the Walter Payton Award on Monday night as the best player in the Football Championship Subdivision.

“I have never been a part of a team that played with so much passion,” said Robertson, a junior from Paramus, N. J. “I cannot say enough about my teammates and about my offensive line, running backs and receivers. They are the ones who got me this award.”

The other finalists were Eastern Washington quarterback Vernon Adams Jr., who was the runner-up for the Payton for the second straight season, and Idaho State quarterback Justin Arias.

Robertson passed for 2,846 yards and 35 touchdowns, with three interceptions, and ran for 1,078 yards and 11 touchdowns this season.

“This is a tremendous night for our university and a fantastic honor for our football program,” Wildcats coach Andy Talley said. “You could not meet a more All-American guy than John Robertson. He is a tremendous student and he is extremely humble.”