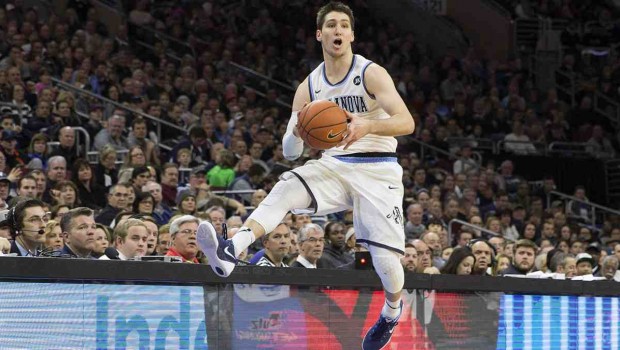 VILLANOVA’S ROAD TO THE FINAL 4 BEGINS: LAFAYETTE AT 6:50 ON TBS

All the play-in games are over, all the office pools have been filled out, President Obama has filled out his bracket (he picked Villanova to lose to Kentucky in the championship game on April 6 in Indy) and today, March 19, is when the Wildcats’ drive to the Final Four begins!

The East Region’s top seed goes into the tournament on a 15-game winning streak. The Wildcats’ balanced attack is led by senior guard Darrun Hilliard (14 points a game), sophomore guard Josh Hart (10.4 ppg off the bench) and junior guard Ryan Arcidiacono (10.2 ppg, photo above). Villanova outscores its opponents by 15.4 points and won the Big East regular season and tournament titles in the same season for the first time

No 16-seed has ever beaten a No. 1, but Lafayette has some cause for hope. First, the great equalizer is often three-point shooting — and the Leopards shoot a blistering 41% as a team. Second, these two teams played in last season’s regular-season opener, and the Leopards played Villanova tough in the first half, trailing by only 29-27. Keys will be point guard Nick Lindner (5.4 assists a game) and 6-9 senior forward Dan Trist, an Australian who leads the team with 17.3 points a game.

Lafayette coach Fran O’Hanlon played for Villanova from 1968-1970 under coach Jack Kraft. The Wildcats were 62-21 when O’Hanlon played and twice reached the NCAA tournament, including the Round of 8 in 1970. This is the 30th anniversary of Villanova’s 1985 national championship, a colossal upset of Georgetown in the title game.