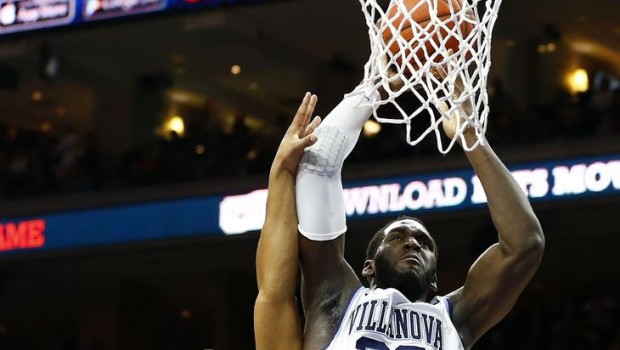 St. John’s coach Steve Lavin preached to his team after yesterday’s 105-68 blowout by high-flying Villanova that:

It’s only one game, after all, and we didn’t play two of our best players, and what really counts is the Big East tournament that starts Wednesday in our backyard!

All that is true.

But No. 4-ranked Villanova sent a different message in the regular-season finale Saturday at a packed and rowdy Wells Fargo Center. It was the Wildcats’ highest score in three seasons. The 37-point defeat was St. John’s worst since a 42-point loss (97-55) at No. 3 Duke on Feb. 24, 2002.

Villanova (29-2, 16-2 Big East), which has won 12 consecutive games and is eyeing a top seed in the NCAA tournament, rallied from an 11-point deficit to take a 50-46 lead at halftime, then closed the game with an spectacular 43-10 run, earning a standing ovation from the announced crowd of 19,161 fans. The Wildcats set a program record for regular-season victories. The previous high-water mark was 28 last season.

“Coaches know . . . if you’re in this thing long enough, and you’re down two of your best players, and you’re playing the best team in the country . . . on their home floor, you’re going to take it on the chin,” Lavin said. “And obviously, we down the stretch didn’t want D’Angelo [Harrison] to get injured or other guys to get banged up, so it was good to play our bench and get our reserves in there, get our walk-ons in there.”

St. John’s enters the Big East tournament having won seven of nine games, but it missed an opportunity to surpass last season’s win total. The Storm nevertheless tied a record for most regular-season victories in Lavin’s tenure. He’s led St. John’s to at least 20 wins in three of his four full seasons in Queens. The Wildcats shot 56.1 percent and committed only three turnovers. The Storm shot just 34.5 percent in the second half and 43.9 percent for the game.

St. John’s has lost the last seven meetings with Villanova, including a 90-71 setback Jan. 6 in New York. The Red Storm last defeated the Wildcats on Feb. 26, 2011, in Philadelphia.