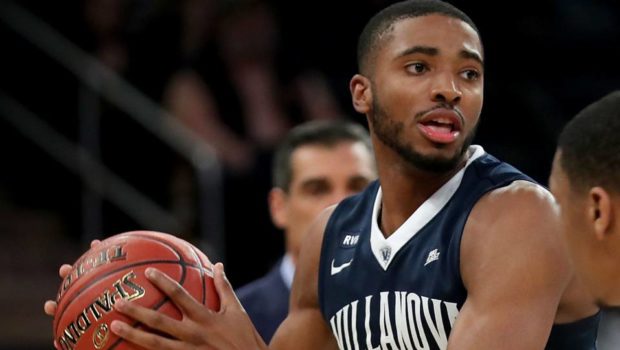 “On this team? Or overall?” Villanova coacj Jay Wright asked before pulling up a stat sheet that listed his players. Then he started to call out the names of each that had taken a year off. There was the crop of redshirt juniors — budding star Mikal Bridges (above) — forward Eric Paschall and guard Phil Booth — who had all sat out for different reasons. There was the two redshirt sophomores, Donte DiVincenzo and Tim Delaney, both of whom had suffered season-ending injuries. And then there was freshman Omari Spellman, whose redshirt season had caused an uproar after the NCAA deemed him academically ineligible. So the number was actually six players.

“It’s a good place to be, the Main Line. You’re not playing basketball, you’re hanging out in La La Land,” Wright admitted to the Washington Post last week. “It’s a nice place to be, it really is.”

It continues to be a nice place, with Villanova ranked No. 1. In fact, the 12-0 Wildcats are on top of nearly every college basketball ranking that matters.

A major reason is the continuity among a group of players who endured an extra year of development — sometimes painfully — before earning minutes with one of the most accomplished programs of the past five years. ]

Some of the redshirts on the roster sat in the shadows in the 2015-16 season, when Nova defeated North Carolina to win their first national championship since 1985.

But the team suffered a blow before last season when Spellman, Wright’s top recruit in the 2016 class, was ruled ineligible. After Booth suffered a season-ending knee injury just three games into last season, only Bridges and DiVincenzo were legitimate contributors on a team that earned the NCAA tournament’s No. 1 overall seed but was upset by Wisconsin in the second round.

“Think about this: They won 30-some games and were a No. 1 seed last year without Booth and Spellman. If they had both of those guys last year, who’s better than Villanova?”

While junior point guard Jalen Brunson didn’t redshirt and is arguably the centerpiece of the roster, averaging a team-high 18.5 points and 4.8 assists per game, he is surrounded by talented cast that had to wait in the wings. That includes Bridges, who was not a top-80 recruit coming out of his suburban Philadelphia high school in 2014 and struggled to physically keep up when he joined the program.

Redshirting “is very important. It’s a real good thing. You get to work on your game a lot. You have more workouts. You get stronger. And you practice every day. The only thing that you’re missing is playing in the games,” Bridges said.

He sat out that first year to in part to add weight to his 191-pound frame; after two seasons as mostly a reserve, he has blossomed into an NBA prospect early this season and is averaging 17.1 points and 6.1 rebounds.

The 6-foot-7 Paschall, who transferred from Fordham and sat out the national championship season due to NCAA transfer rules, and 6-8 Spellman have given Wright the luxury of using larger lineups than in years past; more importantly, they each have a season of learning and perfecting his system while sitting out.

“They’re sitting on the bench listening to coaches talk during the game, when they’re not totally in it,” Wright said of the redshirt years of Bridges and Booth. “They learn a lot. Phil learned a lot intellectually. And I just think Mikal grew physically in his redshirt year.”

Villanova is something of an outlier in a college basketball landscape that often encourages players to leave early for the NBA: It has never had a one-and-done player in 16-plus seasons under Wright, a fact that has sometimes made his program the subject of negative recruiting by other coaches. His system didn’t demand six redshirts this season — but the paths of each of those players has helped fill the gap left behind by four-year pillars, Kris Jenkins and Josh Hart.