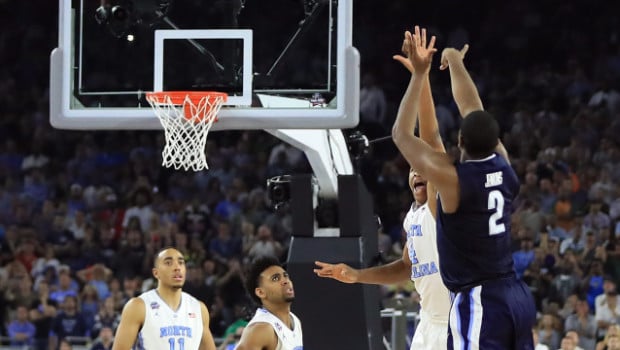 After the Villanova Wildcats beat North Carolina last April for the 2016 NCAA basketball championship, coach Jay Wright made a point of giving his players some good advice.

“We’re going to celebrate for a long time, and you deserve that,” he told them. “But don’t let this define you.”

Afterward, he made a point of taking Kris Jenkins aside.

“This is going to be great because people are going to be talking about this moment for your whole life,” Wright told Jenkins, who hit the shot that won the final game and the title (above). “But if that’s always in your head, you’re never going to be getting better.”

With his senior season and a possible NBA career ahead of him, he set to work. The motto for this season’s Villanova team — which improved to 12-0 with a 90-48 home victory over American University last night and is ranked No. 1 — is “humble and hungry,” and Jenkins has been the poster child for it.

His first task was to lose weight. Jenkins, who is 6-6, ended last season weighing 270 pounds, way above the 240-pound limit Wright had imposed on him in order to keep his starting spot.

This season, Jenkins is a relatively svelte 232, with well-defined muscles and less than 10 percent body fat. Instead of last season’s diet of late-night pizza, chicken Alfredo and fruit juice, he is now sustained by his desire to play in the NBA

“I really give him credit because his personality hasn’t changed but his body certainly has,” his teammate Josh Hart said. “He even eats salad now.”

For years, Wright had hoped Jenkins could learn how to take care of his body and control his weight before he left Villanova, if only to ensure that he could live a long and healthy life. Wright used to try to motivate Jenkins to do that, he said. Now Jenkins takes care of that himself.

One day last month, Wright and his wife, Patty, were rolling out their mats in a Bikram yoga studio, where the temperature rises to 110 degrees during the workout. In came Jenkins, wearing a long-sleeve shirt and long pants. He wanted to sweat.

“He’s been pushing himself to play on a whole different level this year, and it’s been so impressive,” Wright told the New York Times. “He’s better on defense and has played more minutes because he has more endurance. You’ll see it. Not on offense. He’s just a better player, all around.”

While Jenkins’s scoring average (12.8 points a game) is about the same as it was last season, his minutes and his 3-point percentage are up this year. Yet he won’t boast about that when he goes home to Upper Marlboro, Md., for the Christmas break. He wouldn’t dare.

Jenkins moved to Maryland in 2007 to live with Nate and Melody Britt, the parents of North Carolina guard Nate Britt, a friend from their youth basketball days. The Britts are now Jenkins’s legal guardians; Jenkins and the younger Nate Britt call each other brother and have adjacent bedrooms.

At the Britts’ dinner table, where basketball is often the main subject, conversation never veers anywhere near the title game. And Jenkins said there had never been a mention of The Shot, even when the younger Nate glances into Jenkins’s bedroom and sees the Villanova national championship banner that hangs on Jenkins’s wall.

“We never talk about it,” Jenkins told me, before pausing.

“But in 15 or 20 years, when I finally retire and stop playing basketball,” he said, “I’m never going to stop talking about it.” 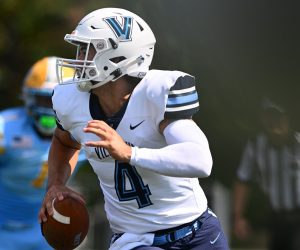