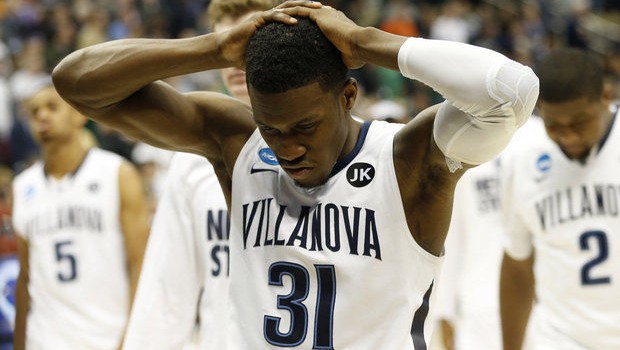 After the first weekend of March Madness, many things have become a lot clearer than they were on Selection Sunday:

Kentucky is still a great bet to win it all.

UCLA is making saps of all the people who squawked about their inclusion in the tournament now that the Bruins are in the Sweet Sixteen.

The Big East may be the most overrated conference in the country.

Thirty years ago, when the Big East was the beast of college basketball, it boasted three teams in the Final Four in Lexington, Ky.: St. John’s vs. Georgetown in the semifinals, then Villanova upsetting the Hoyas for one forever shining moment.

Now? Now Chris Mack and Xavier, conquerors of Georgia State, are left to carry the tattered banner of Big East basketball into the Sweet 16. With their rich two-year Big East tradition.

Even though St. John’s returned to the Big Dance and the conference was buoyed by having six representatives, no one was under any illusions anyone but Villanova was a Final Four contender.

But ’Nova failing again to get over its Sweet 16 hump as a No. 1 seed in the East Region against N.C. State was a blow to the self-esteem of a conference still reeling former standard-bearer members leaving for the greener football pastures.

Fox Sports 1, which holds Big East broadcasting rights, will be keeping its fingers crossed for a sustained St. John’s renaissance that is critical to its long-term commitment to the Big East Conference, which didn’t get a single team to the Sweet 16 a year ago. If the university thinks it can do better than Steve Lavin, it better identify the next young, can’t-miss rising star. A vote for Lavin would be a sensible vote for stability. Until the Red Storm rises and stays risen, the network might want to show “UFC Fight Night” clips at halftime of the games.

St. John’s had little chance once Chris Obekpa was suspended. Weed it and weep indeed.

Providence College had the misfortune of playing against Dayton in the not-so-neutral site of Nationwide Arena in Columbus, Ohio, which sounded much more like Daytonwide Arena. The suspect technical against head coach Ed Cooley didn’t help. Neither did a stinker from LaDontae Henton. More impactful was the Flyers shooting 39 free throws and the Friars shooting seven. It doesn’t excuse a 13-point loss.

Butler was gritty and game, only to lose an overtime death struggle to Notre Dame. And Brad Stevens coaches the Celtics these days.

Georgetown made strides this season, but losing in the third round to Utah makes guy wonder whether the Hoyas require the opposing coach to guarantee victory, à la Eastern Washington’s Jim Hayworth.

It was nice having a marquee coach and program such as Rick Pitino and Louisville for a decade.

And it figures Mike Brey finally gets to a Sweet 16 after a 12-year absence with a likable Irish team that now calls the ACC home.

Ditto Kevin Ollie and the UConn Huskies of the American Athletic Conference winning the 2014 national championship.

“We go back to being a basketball-centric … league going forward,” Providence College president Rev. Brian Shanley said two years ago at a press conference announcing the launch of the new Big East. “ I think [founder] Dave [Gavitt] is smiling down right now on what it is that we’re doing.”

Perhaps Mr. Gavitt will smile again tomorrow. But today we have been served a reminder that a smile is just a frown turned upside down.