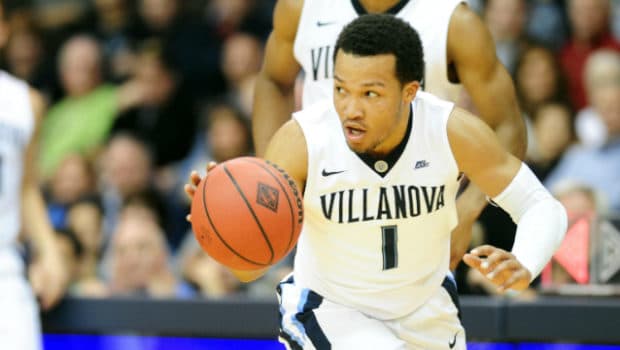 “It’s not (easy),” Villanova coach Jay Wright said. “They (Penn) compete on every play. The score isn’t indicative all the time of what the score was.”

Omari Spellman and Phil Booth had 14 points apiece and Donte DiVincenzo 12 for the Wildcats (7-0), who thrilled the sellout crowd of 1,500 at Jake Nevin Field House.

“It was honestly awesome,” Brunson (above) said. “It was definitely a great experience. It was hard to hear coach sometimes. I tried to read his lips. I couldn’t really hear him.”

The Pavilion, is undergoing a $60 million renovation this season and this was one of three home games outside of the Wells Fargo Center.

“If you don’t come to play against (Penn coach) Steve’s (Donahue) teams, you’ll be in for a battle,” Wright said. “And we came to play.”

The Quakers needed a whole lot more against the red-hot Wildcats.

“On tape, Villanova doesn’t jump out at you,” Donahue said. “What is now apparent is that there’s not a tougher, smarter or more selfless team than Villanova.”

Sophomore Ryan Betley, the reigning Ivy League player of the week, finished with 11 points on 4-of-14 shooting.

“We kind of beat ourselves,” Betley said. “Obviously, they’re a great team. We have so much to work on.”

Villanova kept the pressure on after halftime with tenacious defense and hot shooting. Brunson’s deep 3-pointer gave the Wildcats a 61-40 lead with 13:02 remaining.

Brunson followed with a conventional three-point play for a 68-45 advantage.

From there, the game was essentially decided.

The Wildcats shot 57 percent overall with a consistent effort throughout to extend the Big 5 winning streak.