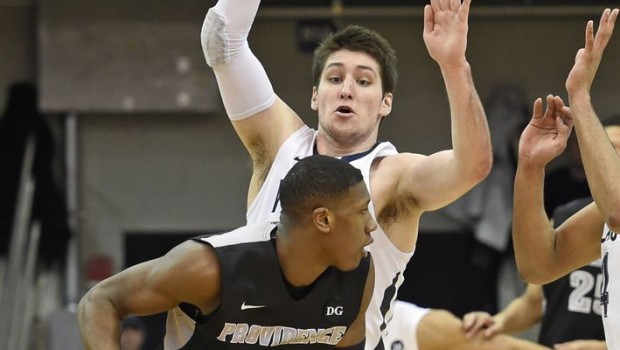 NOVA WILL NEVER WIN A NATIONAL TITLE WITH RYAN A. AT THE POINT When the Cats congregate next October for their first practice, Ryan Arcidiacono (photo above) should take a back seat to Jalen Brunson (left), a Villanova freshman who is a real point guard and was the apple of a hundred national programs’ eye.

Who are the boneheads who think Jay Wright is the reason Villanova got bounced from March Madness again in the Round of 32?

Ed Rendell wrote a column last Saturday in the Daily News that referenced some folks are suggesting that Wright should go because the Cats lost, as a No. 1 seed.

In my view, Wright is the second best coach in the history of the Big 5, after the late, great Jack Ramsay of St. Joseph’s.

And evidently the University of Texas also thinks quite highly of Wright, according to Seth Davis’ Twitter feed:

I’ve learned that Texas’ search firm reached out to representatives of Jay Wright to gauge his interest. Was told thanks but no thanks.

The fact is that Villanova got beat by a better team — N. C. State — just like last year when UConn took them out and went on to win the national championship.

And that’s the rub.

Smith crafted his Tar Heels to win the Atlantic Coast Conference, which in those days were played with rules out of the Tong Wars. Even if Carolina won the ACC tournament, they were in no shape to win a national title.

Smith also had an aversion to starting freshmen, until Michael Jordan came along, and hit what turned out to be the game-winning jumper to beat Georgetown for the national title in 1982.

Wright has some of Smith’s problems.

Villanova has won 62 games and lost 8 over the last two season but have come up short in the post-season.

And the reason is that the post-season is where athleticism comes into play. Games and titles are won by quick, strong, well-condition teams, with a go-to guy that Villanova lacks.

And let me suggest the unthinkable:

Villanova will never be a true contender for the national championship until Wright comes to the following realization:

Ryan Arcidiacono is not good enough, quick enough or reliable enough to be the point guard on a national contender.

How do I know?

Yes, I know the eye test is what the NCAA selection committee gave as the reason for passing over Temple in this year’s Big Dance.

That was bogus, of course. The committee simply didn’t believe that the American Athletic Conference was good enough, so it loaded up on power conferences like the Pac-12, where UCLA was an underachiever all year.

My eye test consists of watching Ryan A. for three years in which he:

Tries a head fake and fails to lose his defender.

Drives into traffic, gets stopped and has to make a bad pass at someone’s feet.

Pivots to beat the band and still can’t break free.

Which means he is not capable of running an offense on a national champion.

It’s wonderful that Ryan A. stuck up for the Cats after they lost to N. C. State:

“Three times, three games this year, we just weren’t able to do it,” guard Ryan Arcidiacono said. “The other team was better that day. You just have to credit N.C. State for the way they played. But that doesn’t define our whole season. Yes, this hurts. It hurts everyone that we’re not making the second weekend. But I think we battled down to the very last second. We did what we do.”

So when the Cats congregate next October for their first practice, Ryan A. should take a back seat to Jalen Brunson, a Villanova freshman who is a real point guard and was the apple of a hundred national programs’ eye.

Two days ago he won the Powerade Jam Fest Skills Competition, clearing the course of dribbling, passing and shooting in 30.6 seconds at University of Chicago.

No disrespect to Ryan A., who has been Wright’s coach on the floor for three years and was voted co-Big East player of the year.

But he is too slow and predictable to run the offense for a prospective national champion. Wright should take a page from Dean Smith and start the freshman Brunson.

When Smith started Michael Jordan it won him the 1982 title. And while Brunson will not be like Mike in many area, he needs to be on the point for the Cats in 2015-16.