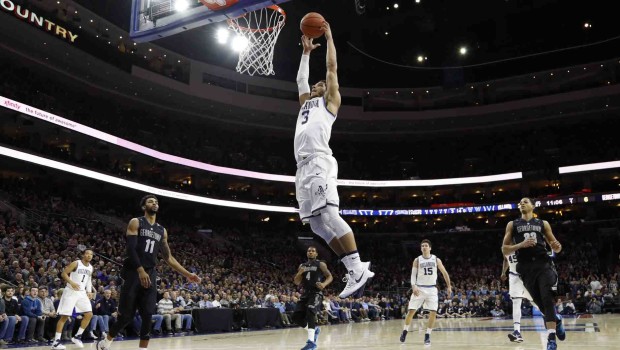 Villanova ended its regular season in grand style today and is heading to New York as the top seed in the Big East tournament.

Josh Hart (above) scored 18 points, Kris Jenkins had 17 and No. 3 Villanova scored a 84-71 win over Georgetown at the Wells.

The Big East champion Wildcats (27-4, 16-2) dominated from the opening tip and looked every bit the favorite to win the conference tournament in New York. Win a second straight Big East tourney, and the Wildcats are all but guaranteed a No. 1 seed in the NCAA Tournament.

Villanova will savor this one against its longtime Big East rival.

The Wildcats raced to a 21-point lead midway through the first half and had a packed house going wild. The NBA arena is the site of an NCAA East regional final and the Wildcats would love to return and clinch a Final Four berth just a few miles from campus.