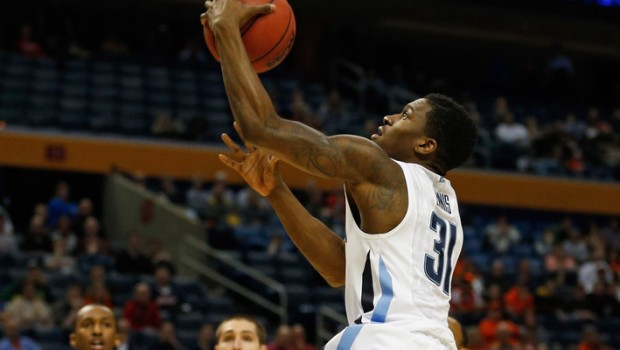 VILLANOVA WELCOMES ROLLIE BACK, THEN ROLLS HIS TEAM 93-50 Villanova rolled out the red carpet for former coach Rollie Massimino last night at the Pavilion, showing him the love that he deserves for having coached the Cats to the incredible 1985 NCAA title.

And then the Wildcats took the court and blew out Rollie’s Northwood team 93-50.

Darrun Hilliard scored 20 points on 8-of-10 shooting from the field to lead the way for the `Cats, who jumped out to a 9-1 lead in the game’s opening minutes and never looked back.

The Wildcats built a 50-23 halftime advantage on the strength of .571 shooting from the floor (20-of-35). Villanova finished the evening connecting on .557 of its field goal attempts against the Seahawks of the NAIA.

The game, though, was only part of what this night was about. The bulk of the 1985 NCAA Champions were in the Pavilion to watch their former coach, Massimino, return to the floor in an official game for the first time since exiting as Villanova’s head coach in 1992.

Massimino coached 19 seasons at Villanova and among the legions of assistants he has sent on to head coaching positions – many of whom were in attendance on this night – is current Villanova head coach Jay Wright.

“It’s great to be back,” added Massimino.

“To have Coach (Massimino) back is a thrill for all of us,” Wright told a packed pre-game press conference featuring the two head coaches.

Fox Sports 1 broadcast the game nationally and interviewed such ’85 legends as Dwayne McClain, Gary McLain, Harold Pressley and Harold Jensen. The squad was honored in a pre-game ceremony as well.

The 1985 team was together on the eve of this contest at a special reunion dinner held at the Villanova Conference Center. The team helped Massimino celebrate his 80th birthday, which falls later in the month of November and once again the bond they forged in that magical season of 1984-85.

“It was a wonderful, emotional evening last night,” stated Massimino. “We had 175 people there.”

“We’ve had a wonderful time,” added Massimino, who has built the NAIA power from scratch since taking the helm of the West Palm Beach, Fla., program in 2006.

Stories from the old days were dispensed in plentiful supply at the dinner according to Massimino.

“They re-lived a lot of the things they did when they were kids,” noted Massimino. “Some were new, some were old. But they presented me with a picture of my quotes that I’ve used over the years.”

“It was a wonderful night.”