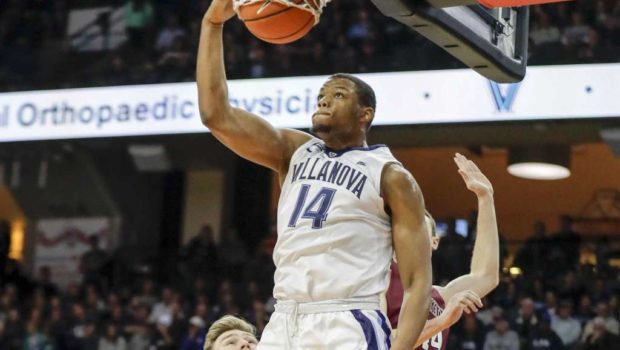 VILLANOVA WAXES LAFAYETTE INSIDE AND OUT 104-57!

Mikal Bridges set a Villanova record by hitting all six of his 3-pointers and scored 24 points in the No. 5 Cats’ 104-57 rout of Lafayette.

Three nights after setting a school record with 13 blocked shots in a blowout of Nicholls, the versatile and deep Wildcats showed another strength and overwhelmed the Leopards (0-3).

Matt Klinewski had 16 points and six rebounds for Lafayette, which was 7 of 29 from 3-point range.

Bridges finished 9 of 10 from the field before he sat out the final 10 minutes. The junior bested his previous career-high by one point set Tuesday.

While it was a Villanova home game, it was played about 50 miles from campus at the PPL Center, home of minor league hockey’s Lehigh Valley Phantoms. It was a 20-mile drive for Lafayette, but the Wildcats sure seemed at home.

Omari Spellman (above) had 15 points and nine rebounds and Eric Paschall had 14 points and eight boards.