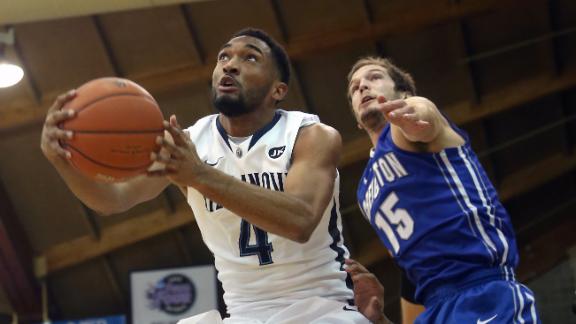 Dougie McBuckets/McDermott, who torched the Cats twice during the 2013-14 season.

Darrun Hilliard (photo above) scored a season-high 24 points to lead Villanova to a 71-50 victory over Creighton Sunday night at the Pavilion..

Ryan Arcidiacono added 10 points for the Wildcats (18-2, 5-2 Big East), which rebounded from one of its worst performances of the season — last Monday’s 78-58 defeat at Georgetown.

James Milliken had 13 points for the Bluejays (9-12, 0-8), who lost their ninth straight game. Creighton’s last win came Dec. 19 at home versus Texas-Pan American.

Creighton handed the Wildcats their only two league losses last season, winning a pair of blowouts by a combined 49 points. The Bluejays set a Big East and school record by making 21 3-pointers in a 96-68 victory last January in Philly. They also routed Villanova 101-80 in Omaha last season.

Of course, that Creighton team had last season’s player of the year McDermott, along with three other starters. None were with Creighton Sunday night.

The Bluejays were 4-for-21 (19 percent) from the arc this time, committed 19 turnovers and lacked the firepower to stay with Villanova.

Villanova, which led by 15 at intermission, maintained a double-digit advantage throughout the second half.

Hilliard finished 9 for 15 from the field, including 6 for 10 from behind the arc.

Villanova scored the first 15 points of the game, capped by JayVaughn Pinkston’s free throw 6:51 in. The Bluejays got as close as eight before Villanova scored 10 straight points gave the hosts a 29-11 advantage after Hilliard’s 3-pointer with 40 seconds left before intermission. Austin Chatman’s 3 from the right corner just before the buzzer made it 29-14 at the break.

The Bluejays had twice as many turnovers (12) than field goals (6) in the opening 20 minutes.