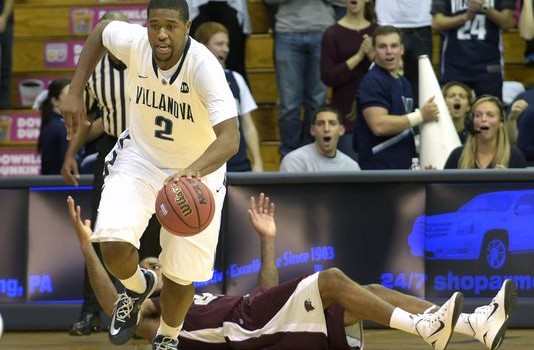 The Big Five got out of the gate last weekend, and Monday night it took several small steps toward the regular season with Villanova and Temple beating cupcakes and St. Joseph’s squeaking past city rival Drexel.

Kris Jenkins (photo above) had 15 points to lead No. 12 Villanova to an 81-44 rout over Maryland-Eastern Shore.

Daniel Ochefu, Darrun Hilliard and Dylan Ennis each scored 10 points for the Wildcats (2-0), who were picked to win the Big East in the preseason. Villanova returns four of five starters from a team that went 29-5 overall and 16-2 in the Big East to finish first in the regular season before losing to eventual national champion UConn in the NCAA tournament.

The game was part of the Progressive Legends Classic. Villanova next hosts Bucknell on Thursday before the tournament shifts to Brooklyn’s Barclays Center Nov. 24 with Villanova playing No. 15 VCU and No. 24 Michigan facing Oregon.

Ryan Arcidiacono’s 3-pointer 3:55 into the game gave Villanova a 13-2 lead and the Wildcats poured it on from that point.

Will Cummings and Quenton DeCosey each scored 20 points as Temple defeated Louisiana Tech 82-75.

Temple was up 73-64 with 45 seconds left and Cummings finished it out by sinking 7 of 10 free throws. Obi Enechionyia added a pair.

The Owls owned a 45-37 advantage on the boards with Cummings grabbing a career-high nine. Josh Brown tied his career-high in rebounds with seven and scored 17 points.

Brown’s layup with 1:30 left broke a tie at 47 and gave the Hawks the lead for good.

Drexel turned it over before Isaiah Miles made the first of two free throws to make it 50-47 with 29 seconds left. Damion Lee hit a pair of free throws for Drexel, which quickly fouled after the inbounds pass and Shavar Newkirk made both free throws with 11 seconds left to close the scoring.

Lee, who scored 23 points and grabbed seven rebounds, missed a 3-pointer in the closing seconds.

The teams combined to make just three field goals in the final 6 minutes.