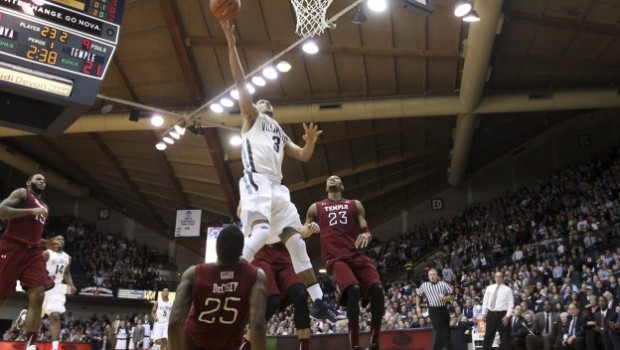 In the Big Five, tradition dictates that on Any Given Sunday (or any other day or night) you can throw the records out the window because anything can happen.

That was not the case yesterday as undefeated and nationally ranked Villanova took Temple to school. Josh Hart (photo above) and Darrun Hilliard (at left) each scored 20 points to keep No. 7 Villanova undefeated in an 85-62 win over Temple at the Pavilion.

The Wildcats were never seriously threatened and won their ninth straight game in the city series played by the Villanova, Temple, La Salle, Saint Joseph’s and Penn. The Wildcats don’t play Penn until Jan. 17.

“We can feel the vibe around the game,” coach Jay Wright said. “People love those games. We just love being able to play any time.”

The Wildcats are 10-0 for the second straight year and have won all three games against their Philly rivals. They started 11-0 last season before losing to former Big East foe Syracuse. Up next for the Wildcats, another date with the Orange on Dec. 20 at the Wells Fargo Center.

Hart and Hilliard became the first Wildcats to score 20 points this season. Both players made 6 of 7 shots from the field with three 3-pointers.

Without a true go-to scorer, Wright’s team has become one of the nation’s best with a collection of scoring threats. Dylan Ennis (12.9 points) and Hilliard (10.7 points) were the only Wildcats in the lineup averaging in double digits. Ennis scored seven points.

“It nice, though, when a couple of guys get it going,” Wright said.

Hart, a 6-foot-5 guard, came off the bench to hit all three 3-pointers and make his first six shots from the floor. He sank two free throws midway through the second half to hit 20 points.

The Wildcats made 9 of 15 3-pointers. JayVaughn Pinkston and Daniel Ochefu also scored in double digits.

“They play hard, they play together and it doesn’t look like anybody cares who scores,” Temple coach Fran Dunphy said.

One of the turning points against a weak-shooting Temple team came late in the first half. JayVaughn Pinkston swatted Will Cummings’ layup attempt, but Hart grabbed the ball on one bounce and went all the way for a three-point play and a 30-21 lead.

Hilliard and Hart followed with consecutive 3s to help the Wildcats break the game open and storm into halftime with a 56-39 lead.

“Every Big 5 game is competitive,” Hilliard said. “Teams come in here and try and play harder than us. Every year it’s highly difficult.”

Temple, which missed the NCAA tournament last season for the first time since 2007, cut the lead to 10 early in the second half on five straight points from Cummings. He scored 14 points.

With an offense only shooting 36 percent from the floor on the season, Temple’s run was short-lived. Ryan Arcidiacono and Hilliard hit back-to-back 3s for a 66-43 lead, and the rout was on.