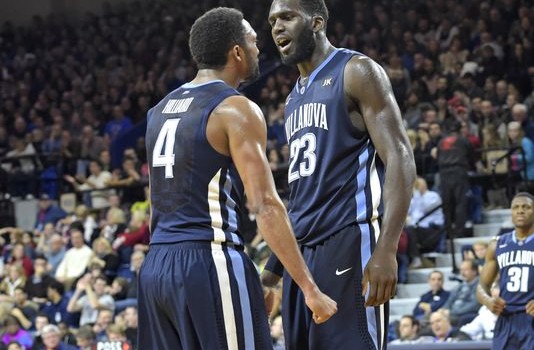 IF VILLANOVA SURVIVES BIG EAST TOURNAMENT, IT WILL BE A NO. 1 SEED

Conference tournament begin this week, with Selection Sunday — when the entire 68-team field for the NCAA basketball tournament is announced — six days away.

So now the debate rages on about which four teams will granted No. 1 seeds.

There are six legitimate No. 1s.

Undefeated Kentucky is the only true lock. Villanova, Duke and Virginia currently hold the top seeds in the latest USA TODAY Sports’ bracketology projection. Virginia’s 59-57 upset loss to Louisville on Saturday moved the Cavaliers to the border of the No. 1 seed line, but keep it mind we’re discussing the full body of work over the course of the season. Virginia has lost to Duke and Louisville. That’s it. It would take a bad loss in the Cavaliers’ opener of the ACC tournament to pave way for the Wisconsin or Arizona to leapfrog them.

There’s a better chance if either Duke or Villanova slip up. Although, the Blue Devils’ 84-77 road victory against North Carolina makes them relatively secure.

If Villanova, which routed St. John’s 105-68 on Saturday, loses one game in the Big East tournament — even if it’s in the semifinals or final — that might be the best-case scenario for Wisconsin or Arizona, who would both have to win their league tournaments. That’s a bit perplexing considering how well both those two teams are playing. But bad losses — to Rutgers for Wisconsin and to Arizona State for Arizona — are the deal breakers. That and finishing Duke’s runner-up finish in the ACC holds more weight than convincingly winning the Big Ten and Pac-12 in years where both of those conferences lack powerful teams.