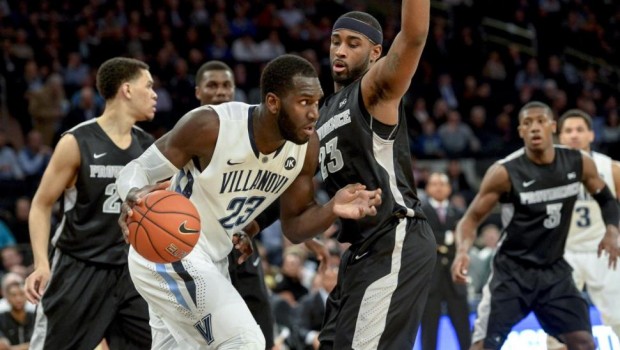 Daniel Ochefu had 15 points and 13 boards for the Cats.

This is the way it looks when Villanova can’t hit the 3’s — 7-for-23 for 30% —that have become its offensive trademark.

And this is the way the Big East tournament used to be like during the original conference’s salad days in the 1980s.

Ryan Arcidiacono hit two free throws with 3.1 seconds left after a questionable foul call, and fourth-ranked Villanova escaped Providence 63-61 on Friday night to return to the Big East title game for the first time since 1997.

The Friars’ Kris Dunn, who shared conference Player of the Year honors with Arcidiacono but outplayed him Friday, made a layup off a turnover to tie it with 12.4 seconds remaining. Arcidiacono then drove to the hoop and Ben Bentil, whose steal and assist led to the tying basket, was called for a foul even though replays appeared to show little contact.

Providence scoring leader LaDontae Henton ended a rough night by missing a long 3-pointer at the buzzer that would have won it.

With Providence trailing 61-57 and 22.3 seconds left, Dunn quickly drove to the hoop to pull the Friars within two. Dylan Ennis then couldn’t get the ball into Hart, and Bentil corralled it and passed to Dunn for the tying layup.

After the Friars pulled within 36-33 early in the second half, the versatile Hart took over just as he did in Thursday’s quarterfinal win over Marquette. He had two assists to give teammates easy baskets then hit a jumper to put the Wildcats up 43-34. After another Villanova sub, Kris Jenkins, took a charge and hit a 3-pointer, Hart’s free throw gave the Wildcats a 47-34 lead with less than 14 minutes left.

But Dunn carried the Friars back into the game

Scoring leader Darrun Hilliard had 10 points in the first 11 minutes, then didn’t score again until the game was nearly over, saddled by second-half foul trouble. But that one basket was huge, a jumper that put Villanova up 61-56 with just over a minute left. He proceeded to foul out in Providence’s next possession, though.