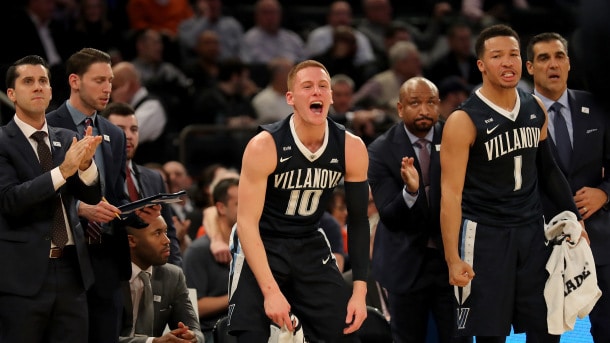 Mikal Bridges had a career night, leading No. 4 Villanova to an 88-72 win over No. 12 Gonzaga in Madison Square Garden.

“A lot of great things have happened in this building. It’s a great feeling,” said Bridges, a junior guard who produced career-high totals with 28 points and five 3-pointers. “It’s a better feeling that we got a win, so we’re just going to get ready and prepare for La Salle on Sunday.”

Bridges also had six rebounds for Villanova (9-0) in the Jimmy V Classic game. Phil Booth added 20 points on 9-of-14 shooting, and point guard Jalen Brunson, who averages 17.2 points and 4.3 assists, finished a foul-plagued game with 12 points and five assists.

Villanova, which shot 51.7 percent from the field, was 10 for 21 from 3-point range, but the Wildcats struggled at the free-throw line by making 18 of 27.

“We played well through foul trouble because we had great leadership from Jalen, Mikal and Phil,” Villanova coach Jay Wright said. “They are great leaders, and they got our guys ready to play. It was a good win for us.”

Gonzaga, which had not trailed by more than nine points in its first eight games, fell behind by as many as 17 points in the first half before trailing 43-30 at intermission.

The Bulldogs committed 11 turnovers in the first half, equaling their field-goal total. They finished with 19 turnovers.

Villanova’s guard play set the tone early with Bridges scoring 12 points and Booth 11 in the first half. They made 8 of 16 shots from the field while their teammates were 8 of 17.

The Bulldogs again cut the lead to seven points with 10:49 left, but Villanova responded with a Bridges 3-pointer and a Brunson layup following a blocked shot by Bridges that put the Wildcats in transition.