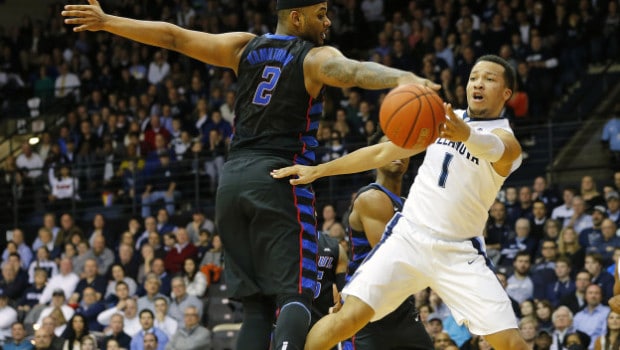 Villanova may no longer be the No. 1 team in the nation, but don’t tell DePaul.

The Cats wrapped up the 2016 Big East regular season title last night as Kris Jenkins scored 14 straight points and a career-high 31 overall, leading No. 3 Villanova to an 83-62 romp over DePaul at the Pavilion.

The Wildcats (26-4, 15-2) are Big East champs for the third straight season and had already clinched the top seed for the conference tournament next week in New York. The Wildcats won the tournament in 2015.

The Wildcats haven’t advanced past the opening weekend of the NCAA Tournament since 2009. The Wildcats were eliminated three times over that span as a No. 1 or 2 NCAA seed.

“We know that we get judged publicly by how you do in the tournament,” Wright said.

Jenkins scored 20 points by halftime and opened the second with consecutive 3s, topping his previous best of 23. The Wildcats shot 68 percent in the first half and proved they are still a force at any ranking.

Jenkins, a 6-foot-6 junior forward, averaged 11.9 points in his first full season as a starter and stuffed a game’s worth of production in 3:31. With Villanova leading 11-10, Jenkins buried four straight 3-pointers. He forced a steal and went in for a layup that made it 25-10 and capped his outburst.

“My teammates do an unbelievable job of making the right play,” Jenkins said. “Recently, the right play has just been to catch and shoot.”

Jenkins came out for a breather and Ryan Arcidiacono promptly buried a 3 that stretched the lead to insurmountable for DePaul (9-20, 3-14).

“He’s become our most consistent player because his mindset has been tremendous and he’s just trying to do the right things to help our team be successful,” DePaul coach Dave Leitao said of Cain.

The outcome was never in doubt, Villanova has won 12 straight against the perennial Big East cellar dwellers.

With all the hype on freshman guard Jalen Brunson, and senior stalwarts Arcidiacono and Daniel Ochefu carrying a bulk of the scoring load, Jenkins went a bit unnoticed until the past month.

Jenkins was 11 of 18 from the field and was the first Wildcat this season to top 30. He is a big reason why the Wildcats enter the Big East Tournament as the top seed for the third straight season. The Wildcats will play Thursday against the 8-9 winner from Wednesday night.

Win it all in New York and the Wildcats will surely enter the NCAA Tournament as a No. 1 seed.

But for a few days, there’s a Big East title to savor.

“I’ll love that accomplishment at the end of the season,” said Josh Hart, who scored 18 points. “Right now, it’s something cool. But we’re not focused on it.”

Villanova has 12 seasons of 25-plus victories in program history, six since 2006. … The Wildcats won their 39th straight game at the Pavilion and had their 169th consecutive sellout. … 76ers rookie center Jahlil Okafor was at the game. … Villanova held a moment of silence for Mike Daly, who played on the 1971 NCAA Final Four team, and died last week.