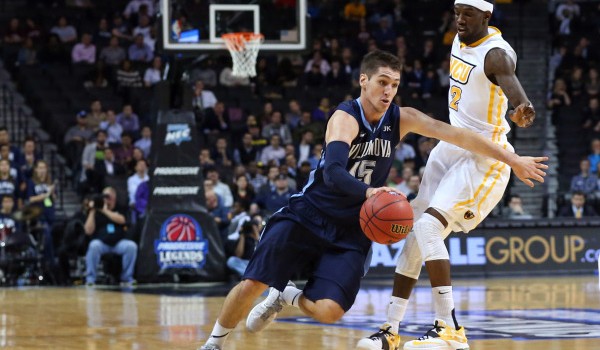 Ryan Arcidiacono ran the offense and JayVaughn Pinkston (below) impressed in front of his family and friends.

Villanova made a statement during a Christmas tournament last year, beating No. 2-ranked Kansas and No. 23-ranked Iowa en route to a 29-5 record. The Cats turned an evenly matched battle between the best teams from power conferences into a rout, with a 77-53 win over VCU at the Legends Classic at Barclays Center on Monday night.

The championship game of the Legends Classic now pits the Cats against No. 19 Michigan at 10 p.m. tonight on ESPN2.

Following a first half that featured 11 lead changes, No. 12 Villanova (4-0) transformed a four-point deficit early in the second half into a 16-0 run and never looked back, blowing away No. 14 VCU (3-1) by hitting nearly 59 percent from the field in the second half.

“When we saw [VCU] on our schedule, we said, ‘Great. We’re going to know where we are,’ ” Villanova coach Jay Wright said. “This was a great test for us.”

While limiting VCU’s perimeter-oriented offense to 2-of-17 shooting on 3-pointers, the Wildcats showcased superb ball movement. Led by Ryan Arcidiacono (nine assists), the Wildcats assisted on 20 of their 29 field goals, while the Rams finished with four assists.

JayVaughn Pinkston, a Brooklyn native raised roughly 15 minutes from the arena, had struggled through the first three games of the season, averaging less than nine points while shooting under 40 percent from the field, but he snapped the slump in front of family and friends by opening 5-of-5 from the field, giving Villanova a 32-30 lead at halftime. The senior finished with a game-high 15 points, along with seven rebounds.

VCU briefly took the lead back by opening the second half with a 6-0 run, but the see-saw collapsed in just a few minutes, unable to handle the weight of a barrage of Villanova 3-pointers.

After starting the game a combined 1-of-10 from the field, guards Arcidiacono and Darrun Hilliard hit back-to-back 3-pointers to give the Wildcats a 48-36 lead less than four minutes into the second half, a sequence that VCU coach Shaka Smart said “broke our spirit.”