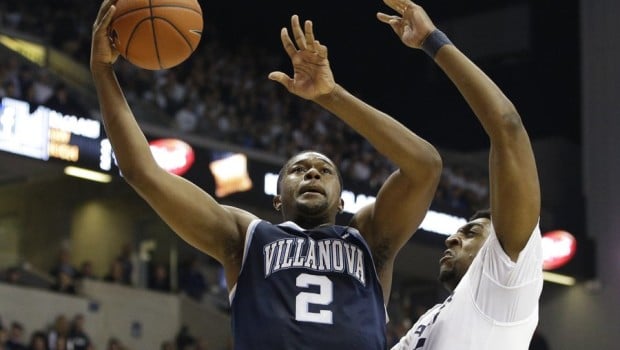 Kris Jenkins fouled out down the stretch of the second half, and he was the only player for Villanova who consistently produced. Jenkins had a game-high 22.

Villanova fans could have seen this coming a mile away.

Atop the national polls for three weeks running, the Wildcats came Cincy last night to play Big East rival Xavier, which had upset on its mind.

And on the court.

Chris Mack’s fifth-ranked Musketeers finally defeated Villanova, slaying No. 1 by seven points, 90-83, and beating Jay Wright for the first time as Big East comrades. In the teams’ six previous meetings, Villanova was undefeated and beat Xavier by an average of 17 points.

The Cintas Center was host last night to the biggest game ever between these programs, and the biggest game in that building’s 15-year history, hosting a No. 1 team in the country for the first time. What a performance by Xavier then, as it showed itself to be a legitimate candidate for a No. 1 seed, meaning it’s going to be in the Final Four conversation, so long as it keeps playing the way it did Wednesday. It was as good as we’ve seen the Muskies all season.

X was already slotted as one of the four top seeds entering the night. Now it’s position there looks even stronger. This was the Musketeers’ first victory over a team currently ranked in the top 25. It finally has a signature win, and if it doesn’t lose again until the Big East title game (no simple feat, but still), then yeah, this will probably be a No. 1-seeded group.

Xavier’s J.P. Macura came off the bench and had himself a ballgame. He finished with a team-high 19 points. Redshirt freshman Edmond Sumner was also tremendous; he too had 19 points, plus nine assists and six rebounds. The environment looked awesome. You could tell how much this game meant for that program and its fanbase. It needed a victory like this, in such dominating fashion, to cement its standing as one of the nation’s best teams.

Villanova — which is still a top-five team, regardless of this loss — couldn’t get out of its own way with foul issues. Kris Jenkins fouled out down the stretch of the second half, and he was the only player for Villanova who consistently produced. Jenkins had a game-high 22. The Wildcats had three players foul out.

In terms of history, this was Xavier’s first win over a No. 1-ranked team since an upset of Saint Joseph’s in the quarterfinals of the 2004 Atlantic 10 tournament.

Here’s the deal: Because Villanova has been a No. 1 and No. 2 seed in the past two seasons, but failed to reach the second weekend of the NCAA Tournament, there are bound to be a majority of skeptics. That’s fine. Whatever. The perception of the Wildcats will continue to be that of a paper tiger, but it’s not based in much reality. The metrics show Villanova is still really good, especially in the realm of this season where so many highly ranked teams have shown themselves to be unreliable. Doubt Villanova at your own peril.

Now it will be interesting to see how seriously people take Xavier. The Musketeers are as deep as anyone in the country, but depth isn’t a requirement for success in the NCAAs. It’s how this team can beat you with five different guys. My guess is Xavier, like Villanova, will be held to an Elite-Eight-or-bust standard. It’s unfair, but that’s the reputation of the current Big East.

Nova and Xavier have split the season series. A rematch in the Big East title game would be terrific, and might even determine a No. 1 seed. But that won’t much matter. What will matter is how these two will need to carry the water for their conference and win at least five games between them in the NCAAs in order to bring skeptics up to speed on how good the Big East has become over the past two years.