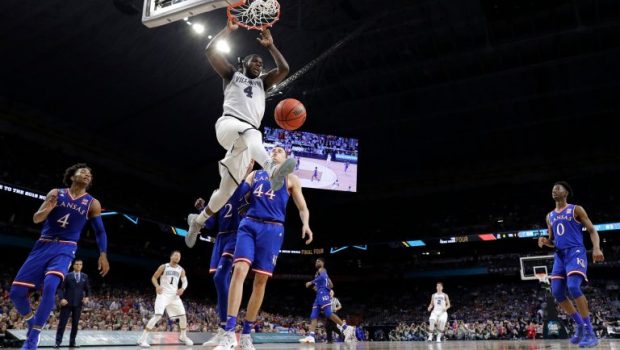 VILLANOVA KILLS KANSAS 95-79, AND IT WASN’T EVEN THAT CLOSE!

Villanova has been the nation’s best team all season, and the Cats proved it again last night by trashing the Kansas Jayhawks 95-79.

And it really wasn’t even that close!

They dismantling the Jayhawks with an unprecedented barrage of outside shooting in the national semifinal game before 68,257 in at the Alamodome in San Antonio to advance to the championship game tomorrow night against Michigan

No team had sunk on more than 13 3-pointers in a Final Four contest, a high-water mark UNLV set in 1987 and Duke matched in 2010. Villanova breezed past that number, breaking the all-time record a minute into the second half and finishing with 18.

“This,” Villanova coach Jay Wright said, “is one of those nights where everything went in.”

It felt like a rerun of Villanova’s victory in the 2016 Final Four, when it connected on 71.4% of its field-goal attempts in a 44-point beatdown of Oklahoma. The Wildcats didn’t shoot quite as well as that, but they looked no less impressive overall, breaking down Kansas’ defense with ease from the opening tip to the final buzzer.

The Jayhawks barely challenged Villanova, who jumped out to a quick 22-4 lead in the first seven minutes. At that moment, Kansas coach Bill Self realized that to come back, Kansas would need “to play a perfect basketball game” from that point forward. “And obviously,” Self said, “that didn’t occur.”

“It’s tough, especially when most of the points come from the 3-point line,” Kansas guard Malik Newman said. “You feel like you don’t really give yourself a chance to win. You put yourself in a deep hole, and it’s hard to climb out of it.”

Indeed, Villanova stayed in command, never letting its second-half advantage dip below 13 and keeping it mostly around 20.

Eric Paschall led the way for the Wildcats, scoring 24 points on 10-of-11 from the field, including 4-of-5 from 3-point range. Jalen Brunson, perhaps the best player in the sport this season, added 18 points and six assists. Omari Spellman and Donte DiVincenzo both contributed 15, rounding out the balanced attack that elevated Villanova into the country’s most dynamic offense this season. All told, seven different Villanova players hit at least one 3.

In other words, business as usual for the Wildcats. Villanova has now converted 454 3-pointers this season, the most in men’s Division I history, passing Virginia Military’s 442 from 2007.

“It makes you proud as a coach to see your guys in the most difficult situation go out there and play with that confidence,” Villanova assistant Ashley Howard said. “If we drill 18 3’s, we should win those games.”

After the game, Villanova’s players to a man wanted to talk not about offense, but about defense, insisting that it matters even more than how they shoot. Paschall said, “That’s what we pride ourselves on.” DiVincenzo referred back to the Wildcats’ Elite Eight victory over Texas Tech last week, when they made just four 3’s and “still grinded it out” for a 12-point win. Villanova can still succeed when the shots don’t fall.

“I feel bad for Kansas,” Wright said. “They’re a great team. We just made every shot.”