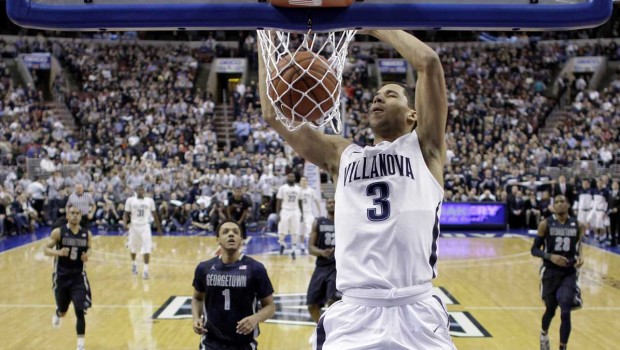 VILLANOVA JUMPS TWO SPOTS TO NO. 4 IN AP COACHES POLL

With the Big East tournament on the horizon next week in New York, Villanova has jumped two spots in the AP coaches poll and now officially stands at No. 4, which will get them a No. 1 seed in the NCAA tournament.

Kentucky, Division I’s only undefeated men’s basketball team, remained entrenched at No. 1 after two routs. The Wildcats (29-0) were a unanimous choice for the fifth straight week after receiving all 65 first-place votes from a media panel Monday.

Two more weeks on top and Kentucky will become the eighth team and first since UNLV in 1991 to go wire-to-wire in the AP poll. Virginia (27-1) held at No. 2 following two lopsided wins.

Then the fun begins. This was a week in which 15 of the 25 teams from the previous poll lost, including two that lost twice.

Gonzaga and Wisconsin both lost, so the next three teams behind them moved up: Duke one place to No. 3, Villanova and Arizona each up two spots. The Badgers fell to sixth after losing to Maryland, and the Bulldogs dropped four spots to No. 7 after losing to BYU.

No. 8 Wichita State moved back into the top 10 after winning its Missouri Valley Conference showdown with Northern Iowa. Kansas dropped a spot to No. 9 after losing to Kansas State.

Maryland’s wins over Wisconsin and Michigan moved the Terrapins into the top 10 for the first time since 2003. A founding member of the ACC, Maryland switched to the Big Ten this season and has quickly established itself among the conference’s best teams. Maryland (24-5) finished 18-1 at home and was unbeaten there in Big Ten games.

Northern Iowa’s first trip to the top 10 lasted one week; the Panthers were down to No. 11 after the loss to the Shockers. Notre Dame also fell out of the top 10, down three spots to No. 12 after losing to Syracuse.