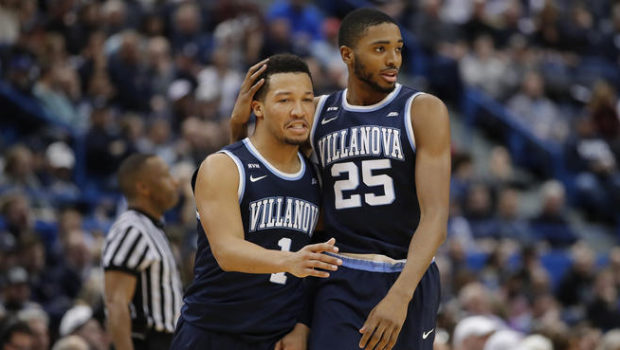 VILLANOVA-GEORGETOWN MAY BE LAST HOME GAME FOR NBA-BOUND BRUNSON AND BRIDGES!

Villanova is No. 4 in the nation and faces Georgetown today at the Wells, and there is a distinct subtext:

This might be the last home game for junior stars Jalen Brunson and Mikal Bridges, both of whom are seriously considering leaving early for the NBA draft.

Bridges led the way for Villanova with 23 points and 10 rebounds while national player of the year candidate Brunson scored 14 points., including 12 in the waning minutes of regulation and overtime when the Wildcats needed baskets.

“My teammates have confidence in me at all times. So does my coach and so do I,” Brunson told the Inky. “I keep the same cool, just not really worry about what happened in the past, keep moving on.”

“That’s the sign of a great player,” Villanova head coach Jay Wright added. “He’s not afraid to fail. He loves having the pressure on his shoulders. That’s what the great ones do. That’s was vintage Jalen Brunson — no fear of failure.”

Villanova shot just 36 percent but managed to come away with a victory over the Pirates.

“That was an old-fashioned Big East rock fight,” Wright said. “I would rather not have played in a game like that but we needed a game like that where we couldn’t make shots. Our defense kept us in it.”

With a victory over Georgetown, Wright will secure his 413rd career victory on the Main Line. The milestone win would tie Wright with Al Severance, who compiled 413 victories from 1936-61.

Georgetown lost a hard-fought battle in overtime to Marquette, 90-86, in its most recent game on Monday.

“All year long we have been a pretty good defensive team,” Georgetown head coach Patrick Ewing told the athletic department’s website. “It just wasn’t there. And even on the boards — we should’ve dominated on the boards and we did not.”

Following impressive wins against Seton Hall at home and on the road at Butler, the Hoyas have now lost three consecutive games to Xavier, Providence and Marquette. It has been a rocky finish after such a promising start to the season with eight straight wins.

Govan narrowly missed a double-double against the Golden Eagles, though he has been Georgetown’s clutch player all season. Govan has 14 double-doubles, which ranks second in the Big East behind only Seton Hall’s Angel Delgado. They are the only two players in the league to average double-doubles.

Govan is also the 20th player in school history to score at least 100 points and grab at least 500 rebounds.