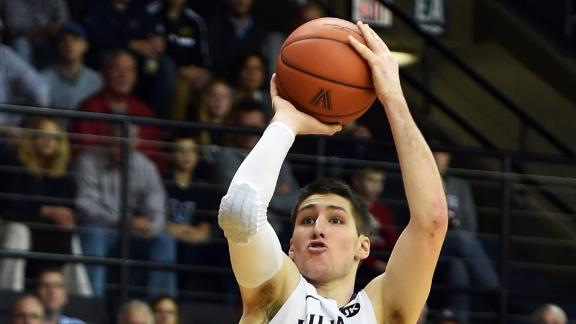 At first it seemed as if Villanova was suffering a hangover from its scintillating 82-77 comeback victory last Saturday against Syracuse.

And then Jay’s Wright’s Wildcats turned on their No. 7-ranked jets and disposed of a pesky opponent.

Dylan Ennis scored 17 points, Ryan Arcidiacono (photo above) matched a season high with 16 and Villanova shot 54 percent from the field to survive an early upset scare with a 92-67 win over NJIT on Tuesday night at the Pavilion.

Daniel Ochefu added 13 points and 10 rebounds for the Wildcats (12-0), who remained perfect on the season to match their second best start in program history.

Four players hit double figures for NJIT (5-8), which stunned Michigan earlier this month and looked prime to pull off their second major upset of the season after shooting a blistering 8 for 13 from 3-point range in the first half.

But after trailing by seven early in the second half, Villanova reeled off a 20-3 run to take a 61-51 lead with 10:30 remaining. Arcidiacono scored seven points in the stretch to hit double figures in scoring for the first time in nine games.

Freshman Phil Booth scored 12 of his 14 points in the second half to help Villanova outscore NJIT, 51-23, after the break and erase the drama that existed before halftime.

Six Villanova players finished in double figures to ease the absence of leading scorer Darrun Hilliard, who missed the game because of a concussion he sustained in Saturday’s win over Syracuse.

The Wildcats looked like they might run away with it early, jumping out to a 9-2 lead on the strength of their inside play. But the Highlanders quickly got hot from long range, burying back-to-back 3-pinters before tying the game at 15-15 on a Winfield Willis jumper.

Willis hit two more 3s, including one at the end of the shot clock, to keep Villanova from building more than a six-point lead. And the Highlanders took their first lead with 3:27 left in the first half when Damon Lynn hit two free throws after Villanova head coach Jay Wright was whistled for a technical foul.

The Wildcats didn’t get the lead back the rest of the half as the Highlanders took a 44-41 advantage into halftime on the strength of 60 percent first-half shooting.