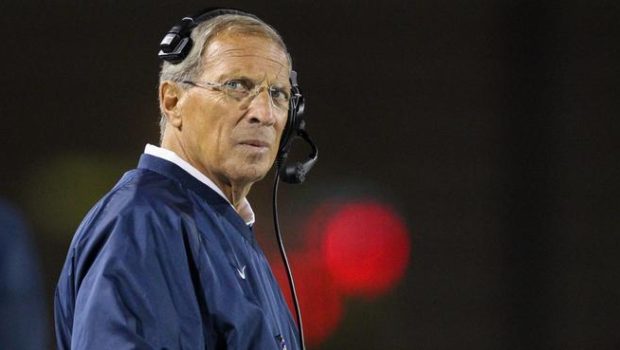 Quarterback Zach Bednarczyk threw four touchdown passes — after throwing four interceptions a week ago — and running back Matt Gudzak had the best game of his career as the Wildcats (8-3 overall, 6-2 CAA) beat Delaware 41-10 for the fifth year in a row and the 10th time in the last 11 meetings.

Villanova’s offense scored on their first four possessions and six of the nine times they had the ball.

Bednarczyk bounced back from the poor performance against the Dukes, finishing 13 for 17 for 195 yards.

“The other night, (linebacker Austin) Calitro said he hadn’t lost to (the Blue Hens) and he didn’t plan to tonight so that was motivation for us the whole game,” Bednarczyk said.

Bednarczyk had a lot of help. Villanova’s running game was too much for the Blue Hens, pounding out 277 yards. Villanova’s strategy has been to rotate Gudzak, Javon White and Aaron Forbes in the backfield and see which one got hot.

This time it was Gudzak. He carried the ball 13 times for a career-high 121 yards and one touchdown. He also pulled in a 54-yard TD pass from Bednarczyk in the second quarter to give the Wildcats a 27-3 lead.

“I just found my rhythm,” Gudzak said. “They kept giving me the ball. The holes were there. The linemen were doing their job and I was able to get some yards off of their blocks.”

Gudzak’s best game came against his father’s alma mater. His dad, Pete, was a fullback for the Blue Hens from 1979-82. That should make Thanksgiving dinner a little interesting.

“I’ve turned him into a Wildcat fan,” Gudzak said.

The improved offensive output was a welcome sight for a Villanova defense that has been brilliant all season. The Blue Hens could not do much against the Wildcats, totaling 227 yards, and the only points they could muster was a 35-yard Frank Raggo field goal and a seven-yard TD pass from quarterback Joe Walker to Owen Tyler.

Both of those scores and most of the yards came in the first half. Delaware did not score and had 54 total yards in the second half. The wind, which picked up considerably, had a lot to do with Delaware’s offensive woes, but so did Villanova’s defense.

And Villanova’s defense was feeding off its offense.

“It took a lot of pressure off of us,” Calitro said. “Every time the offense scores it means that we don’t have to stop every play. We can bend a little, but not break. They did such a great job today. I was so happy to see it. “