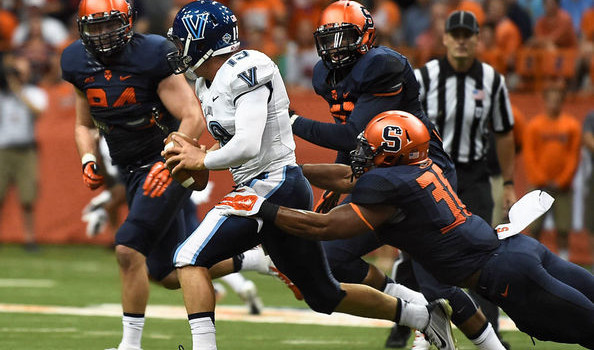 For Villanova, it was a moral victory but a gut-wrenching defeat.

Punter Riley Dixon threw a 1-yard touchdown pass to Kendall Moore on a fake field goal in the second overtime, and Syracuse stopped a 2-point try to beat Villanova 27-26 on Friday night.

Villanova’s John Robertson (photo above) connected with tailback Gary Underwood for a 9-yard touchdown strike to pull the Wildcats within one in sweltering conditions in the Carrier Dome. Villanova coach Andy Talley went for the victory with the 2-point conversion attempt, and defensive end Robert Welch stopped Robertson at the 4.

The teams traded field goals in the first overtime.

Villanova’s Chris Gough kicked a 25-yard field goal to tie it at 17 with 7:14 left in the fourth quarter, then missed a 25-yarder with 12 seconds left in regulation in the opener for both teams.

Syracuse quarterback Terrel Hunt was ejected for punching linebacker Dillon Lucas after a 6-yard gain late in the first half.

Robertson, the Colonial Athletic Association preseason player of the year, was 16 of 27 for 199 yards. He ran 34 times for another 115 yards, accounting for 314 yards of total offense.

He eluded Syracuse defenders all night, almost singlehandedly leading the Wildcats to what would have been Syracuse’s first loss to an FCS team. Syracuse was the lone FBS team to not allow a 100-yard rusher last season.

Wilson led Syracuse on a 13-play, 87-yard touchdown drive at the start of the second half, with Adonis Ameen-Moore scoring from the 2 for a 17-7 lead. Safety Cameron McCurry was called for pass interference on the drive.

Villanova’s Poppy Livers returned a punt 67 yards for touchdown, zigzagging across the field and down the right sideline, to cut it to 17-14 late in the third quarter.

Syracuse’s Prince Tyson-Gulley opened the scoring midway through the first quarter with a 65-yard run. Tyson-Gulley had 100 yards on 11 carries.

Villanova tied on Kevin Monangai’s 5-yard run in the second, and Syracuse made it 10-7 with 6:49 left in the half on Ryan Norton’s 38-yard field goal.