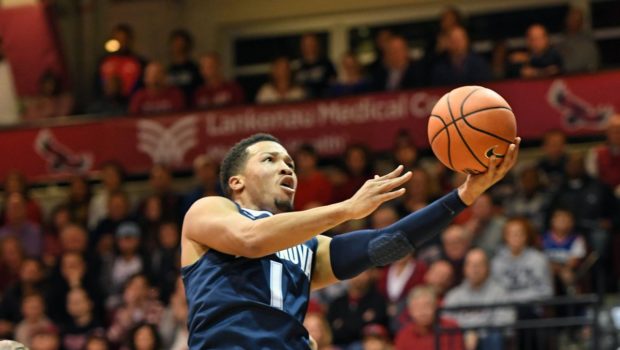 The Wildcats made 19 of 35 3s; the Hawks had just 21 baskets in the game. Omari Spellman had 16 points and 11 rebounds, Mikal Bridges had 18 points and nine rebounds and Phil Booth had 17 points and eight boards for the Wildcats.

The Wildcats won for a 20th straight time in the Big 5! They’ve won 19 of those games by at least 10 points and haven’t been defeated by a Philly team since Temple won on Dec. 5, 2012.

The Hawks (4-4) put up a spirited fight in front of 4,200 fans at their cozy arena for the first 17 minutes and had the student section going wild in the bleachers. James Demery, who led the Hawks with 14 points, even converted a three-point play to pull SJU to 29-27 and the Hawks took aim on their first win in the series since Dec. 17, 2011.

Booth hit a 3, Bridges hit a 3 and Spellman hit two 3s. The 12-0 run that closed the half stretched to 17-0 in the second and 30-4 overall as the Wildcats pulled away from behind the arc. Booth, Bridges and Spellman each hit four 3s.

“It’s terrific for the city that we have a nationally ranked program that’s in the top five,” Martelli said.

Spellman was benched for the first 3:19 of the game for missing weight. Donte DiVincenzo, who finished with 17 points, got the start.

Booth topped his season average of 10.3 points and has been a solid contributor after missing last season with an injured left knee. Booth scored 20 points for the Wildcats in the 2016 national championship game.

“I’ve learned more to appreciate the details of the game,” Booth said. “You learn so much sitting out, so you just try and incorporate what you’ve seen.”