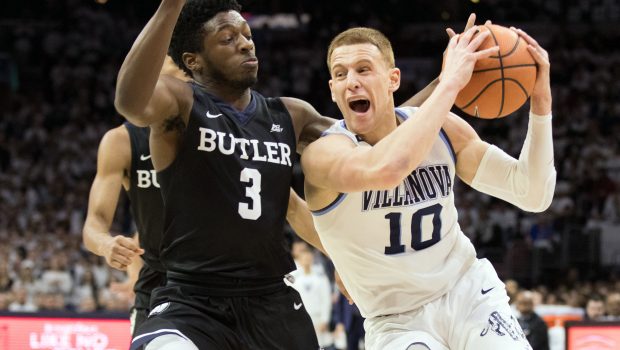 Villanova scored the first 19 points and cruised toward its fourth straight trip in the Big East Tournament championship game in an 87-68 win over Butler.

About 30 minutes after top-seeded Xavier was upset by Providence in overtime, the Wildcats (29-4) hit the court and showed how a favorite should play in a tournament semifinal.

Mikal Bridges hit a 3-pointer five seconds into the game and the Wildcats were on their way: a 16-0 run before Butler coach LaVall Jordan finally called a timeout at the 15:37 mark.

Omari Spellman buried a 3 to make it 19-0 and the Wildcats proved why the Big East tournament title always goes through the Main Line and straight to Madison Square Garden. Butler finally scored and heard some mock cheers for the jumper.

Butler called a 30-second timeout with 11:35 left in the second half and trailed by 25 points.

The Wildcats hit 10 of their first 12 shots that made for an anticlimactic final 35 minutes at the Garden. Providence had rallied from a 17-point second-half deficit and stunned top-seeded and No. 3 Xavier 75-72 in the first conference semifinal that had MSG rocking.

Bridges had 18, Big East player of the year Jalen Brunson scored 17 points and Spellman had 12 points and 12 rebounds.

Under coach Jay Wright, Villanova won the tournament in 2015 and 2017 and lost to Seton Hall in 2016. The four straight Big East title games are one shy of Syracuse’s record five straight from 1986-1990.

“I think we feel like we’re a new team rather than a team that’s stale at the end of the year,” Wright said.

The Wildcats did split two games against Providence but the Friars are coming off overtime games on consecutive nights and will be a heavy underdog.

The Wildcats improved to 14-0 when holding opponents under 70 points.

“That was one of our best defensive performances,” Wright said.

The Wildcats hit six 3s, including Booth’s at the buzzer, to send them into the break ahead 44-25. Told Villanova could put probably four 3-point shooters on the court, Jordan cracked, “seemed like six.”